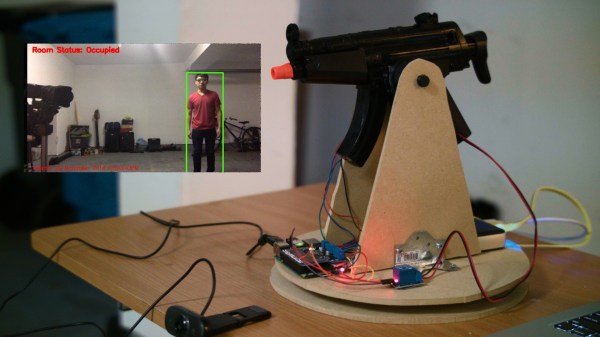 In the eternal struggle for office dominance, the motion-tracking Airsoft/Nerf/whatever, the autonomous turret seems to be the nuclear option. [Aaron] and [Davis] built a motion-tracking turret that uses openCV to detect movement, before hitting a relay to trigger the gun.

There’s a Raspberry Pi controlling a Logitech C210 Pi-compatible webcam, with a stepper hat for the Pi controlling two NEMA steppers that aim the gun. The design is simple but elegant, with a rotating base and an assembly that raises and lowers the weapon.

The openCV intrigues us. We want to see a openCV-powered turret with color detection, so your own team doesn’t get blasted along with your hapless enemies. Or if guarding your cubicle, how about a little openCV facial recognition?

If you want to take a stab at your own, [Aaron] and [Davis] show how they built their project in their Hackaday.io page and their Python script can be found on GitHub.  Otherwise, check out the Counter Strike Airsoft robot, the Airsoft sentry gun, and the Nerf turret powered by Slack we published previously. END_OF_DOCUMENT_TOKEN_TO_BE_REPLACED

END_OF_DOCUMENT_TOKEN_TO_BE_REPLACED 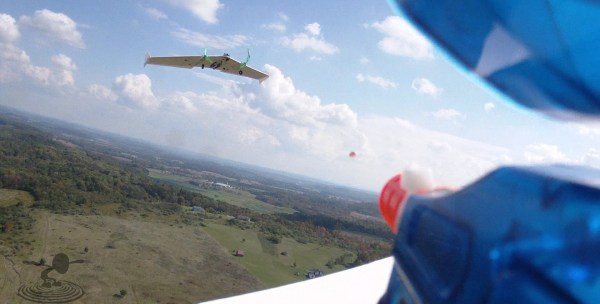 To be honest, we’re surprised this hasn’t been tried before — then again, maybe it has! But what we do know is that the folks over at Flite Test have rigged up an electric Airsoft gun to a large RC airplane, aptly called The Kracken.

The planes are a scaled up version of their own FT Versa Wing, which feature two props, giving them the ability of differential thrust. Not only were they able to strap a semi-automatic Airsoft pistol on top, they also have two GoPros filming the action and giving the gunner a POV for shooting down the enemy plane! Don’t worry though, the enemy plane features its own weapon — A permanent marker! This hardly seems fair though, as the closer the marker gets, the easier shooting down the plane will be!

Don’t take our word for it though, check out the awesome video for yourself, after the break.