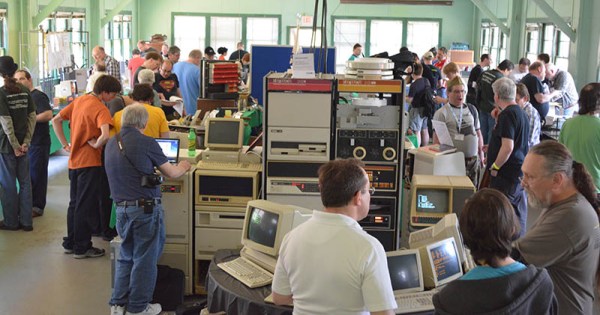 The Vintage Computer Festival East was last weekend, and now it’s time to wrap everything up. We’re going to start this off with a video of the biggest, most intolerable jerk on the planet walking around the boardwalk at Ashbury Park. Thanks to [Fran] for filming it.

That video, despite the wretched casting director, included the reveal of the PDP Straight-8, the 50-year-old minicomputer that was repaired and refurbished by [David Gesswein] just this year. You can see some pictures of that and more below, and a little more on [David]’s website.

END_OF_DOCUMENT_TOKEN_TO_BE_REPLACED Our friends over at Hack42 in the Netherlands decided to have some fun with their computer museum. So far, they’ve been able to display the Hack a Day retro site on three classic computers — including an Apple Lisa, a DEC GIGI, and a run of the mill DEC VT100. We had the opportunity to visit Hack42 last October during our Hackerspacing in Europe trip — but just as a refresher if you don’t remember, Hack42 is in Arnhem, in the Netherlands — just outside of Germany. The compound was built in 1942 as a German military base, disguised as a bunch of farmhouses. It is now home to Hack42, artist studios, and other random businesses. The neat thing is, its location is still blurred out on Google Maps! Needless to say, their hackerspace has lots of space. Seriously. So much so they have their own computer museum! Which is why they’ve decided to have some fun with them… END_OF_DOCUMENT_TOKEN_TO_BE_REPLACED