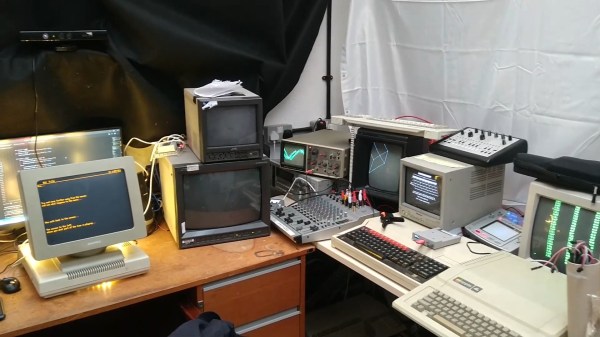 Acorn BBC Master. Apple IIe. Ampex 270 Terminal. Vectrex game console. You’d be hard pressed to find a more diverse hardware collection in the average hacker’s lab. When you add seven Raspberry Pi’s, five CRT monitors, an analog oscilloscope and an LED wall to the mix, one starts to wonder at the menagerie of current and retro hardware. What kind of connoisseur would have such a miscellaneous collection? That’s when you spot smoke and fog machines sitting next to an RGB Laser.

Finally, you learn that all of this disparate paraphernalia is networked together. It is then that you realize that you’re not just dealing with a multi-talented hacker- you’re dealing with a meticulous maestro who’s spent lockdown finishing a project he started nearly twenty years ago!

The machine is called AUVERN and it’s the product of the creative mind of [Owen]. Taking advantage of advances in technology (and copious amounts of free time), [Owen] laboriously put his collection of older rigs to work.

A Python script uses a Kinect sensor’s input to control a Mac Mini running Digital Audio Workstation software. The operator’s location, poses and movements are used to alter the music, lights, and multimedia experience as a whole. MIDI, Ethernet, and serial communications tie the hardware together through Raspberry Pi’s, vintage MIDI interfaces, and more. Watch the video below the break for the technical explanation, but don’t miss the videos on [Owen]’s website for a mesmerizing demonstration of AUVERN in full swing.

AUVERN makes use of the Vectrex32 upgrade which we have previously covered, and we are unavoidably reminded of another pandemic inspired bubble machine. Don’t forget to send us your hacks, projects, and creations through the Tip Line!

END_OF_DOCUMENT_TOKEN_TO_BE_REPLACED

Mass storage presents a problem for those involved in the preservation of older computer hardware. While today’s storage devices are cheap and huge by the standards of decades ago their modern interfaces are beyond the ability of most older computers. And what period mass storage hardware remains is likely to be both unreliable after several decades of neglect, and rather expensive if it works due to its rarity.

The Domesday Project 86 team face this particular problem to a greater extent than almost any others in the field, because their storage device is a particularly rare Philips Laser Disc drive. Their solution is the BeebSCSI, a small board with a CPLD and an AVR microcontroller providing host adaptor and SCSI-1 emulation respectively for a modern micro-SD card.

1986 saw the 900th anniversary of the Domesday Book, a survey and inventory of his new kingdom commissioned in 1086 by the Norman king of England, William the Conqueror. One of the ways the event was marked in 1986 was the BBC Domesday Project, a collaboration between the BBC, several technology companies including Acorn and Philips, and a huge number of volunteers from the general public and the British school system. Pictures, video, and text were gathered relating to locations all over the country, and the whole was compiled with a not-quite-hypertext interface onto a set of Laser Disc ROMs. The system required the upgraded Master version of the 6502-based BBC Micro, a SCSI interface, and a special Laser Disc player model manufactured by Philips for this project alone. The hardware was expensive, rare, and unreliable, so few of its contributors would have seen it in action and it faded from view to become a cause celebre among digital archivists.

There have been several resurrections of the project over the years, including one from the BBC themselves which you can browse online. What makes this project different from the others is that it strives to present the Domesday experience as it was originally intended to be viewed, on as far as possible the original hardware and with the original BBC Micro interface. Many original parts such as BBC Master systems are relatively easy to source in 2016, but the special Laser Disc player is definitely not. This board replaces that impossible link in the chain, and should allow them to present a glimpse of 1986 in more than just the on-screen information.

If you would like to see an original BBC Domesday Project system, you can find one in action at the National Museum of Computing, at Bletchley Park. Meanwhile we’ve already featured another peripheral from the same stable as this one, the SmallyMouse USB-to-quadrature mouse emulator.