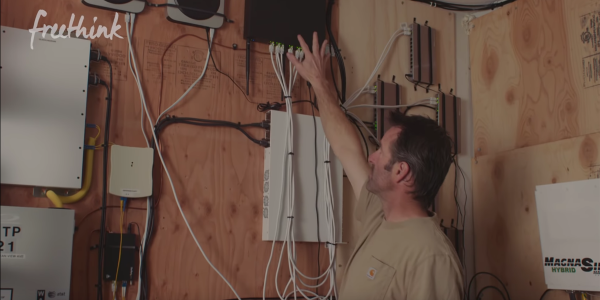 America is a BIG country. There are pockets all across the land where broadband Internet is slow-to-nonexistent, and many individuals are left with wireless cell service as their only means of internet connection. This is the situation [Brandt Kuykendall] found himself in upon moving his family to Dillon Beach, CA. So he started up his own fiber ISP. (YouTube, embedded below.)

“Cell phone service was really our only option, but that proved to be extremely expensive. My wife came home with the bill (of) $707, and that was the last straw.”

Despite being a mere two hours from the technological hub of San Francisco [Brandt] found himself dissatisfied with the level of service he was receiving from his provider. However, instead of shredding his current contract altogether he decided to go directly to the source. He tracked down the location of the AT&T cell tower in his area and made every call he could in order to find out who was in charge of “opening up the taps”. Months of negotiation between AT&T and [Brandt] ensued and eventually resulted in a fiber line being installed directly into his garage.

The story didn’t stop there, because [Brandt] took it upon himself to spread the wealth by providing his neighbors with Wi-Fi access to the fiber optic line in exchange for a small monthly fee. Employing the use of industrial-grade small cell transmitters he essentially created a point-to-point network along his neighbors’ roofs. [Brandt’s] garage serves as the network monitoring hub enabling him to diagnose any traffic issues. What began as one man seeking decent internet speeds burgeoned into a journey to becoming his own ISP which now serves over 100 other residents of the Dillon Beach area.

END_OF_DOCUMENT_TOKEN_TO_BE_REPLACED

Distributed computing is an excellent idea. We have a huge network of computers, many of them always on, why not take advantage of that when the user isn’t? The application that probably comes to mind is Folding@home, which lets you donate your unused computer time to help crunch the numbers for disease research. Everyone wins!

But what if your CPU cycles are being used for profit without your knowledge? Over the weekend this turned out to be the case with Showtime on-demand sites which mined Monero coins while the users was pacified by video playback. The video is a sweet treat while the cost of your electric bill is nudged up ever so slightly.

It’s an interesting hack as even if the user notices the CPU maxing out they’ll likely dismiss it as the horsepower necessary to decode the HD video stream. In this case, both Showtime and the web analytics company whose Javascript contained the mining software denied responsibility. But earlier this month Pirate Bay was found to be voluntarily testing out in-browser mining as a way to make up for dwindling ad revenue.

This is a clever tactic, but comes perilously close to being malicious when done without the user’s permission or knowledge. We wonder if those ubiquitous warnings about cookie usage will at times include notifications about currency mining on the side? Have you seen or tried out any of this Javascript mining? Let us know in the comments below.

The monome was spotted being used in a performance by Imogen Heap on Late Night with David Letterman. Imogen uses the monome 256 model connected to a laptop sitting on the piano. In her performance she uses a combination of live samples and pre-recorded loops proving how great this product is in the hands of an accomplished artist.

Although not identified by name (or function), Letterman does notice the monome at the end of the performance. To see this kind of exposure for an innovative open source product is wonderful. Check out the Letterman clip as well as a monome bonus after the break. END_OF_DOCUMENT_TOKEN_TO_BE_REPLACED

In what seems like another move to blur the line between digital and print media, CBS has announced that they will be introducing something called Video-in-Print technology in next month’s issue of Entertainment Weekly. Video-in-Print, or ViP, technology consists of a small LCD screen and circuit board that can be inserted into print media and play video and audio content. CBS is using the ViP technology to promote their fall prime-time television lineup. Video-in-Print technology is the brainchild of Americhip, a company that claims to specialize in multisensory marketing. The ViP player in next month’s issue of Entertainment Weekly incorporates a 320×240 resolution TFT LCD screen and a rechargeable battery lasting 50-60 hours. The battery can be recharged via the player’s on-board mini USB port. While this isn’t the first time that we’ve seen a magazine do something like this, as far as we know this is the first time that anyone has put a video player into a magazine. That being said, there seems to be no indication whether or not CBS will make it easy for us to modify the ViP player’s software like Esquire did with their e-ink display. We’re not entirely sure what we’re going to do with the ViP player, but the fact that it has a mini USB port gives us some interesting ideas. Juicebox, anyone?