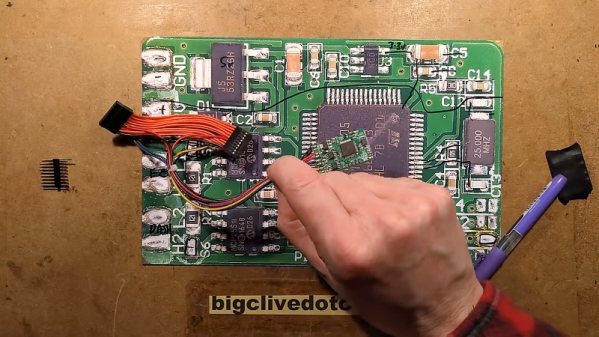 END_OF_DOCUMENT_TOKEN_TO_BE_REPLACED

It is one of our favorite chips, and the brains behind the Arduino UNO and its clones, and it’s getting a tweak (PDF). The ATmega328 and other megaX8-series chips have undergone a subtle design change that probably won’t affect you, but will cause hours of debugging headaches if it does. So here’s your heads-up. The full-swing oscillator driver circuitry is being removed. As always, there’s good news and bad news.

The older ATmega chips had two different crystal drivers, a low-power one that worked for lower speeds, and higher-current version that would make even recalcitrant crystals with fat loading capacitors sing. This “full-swing” crystal driver was good for 16 MHz and up.

The good news about the change is that the low-power crystal driver has been improved to the point that it’ll drive 16 MHz crystals, so you probably don’t need the full-swing driver anymore unless you’re running the chip at 20 MHz (or higher, you naughty little overclocker).

This is tremendously important for Arduinos, for instance, which run a 16 MHz crystal. Can you imagine the public-relations disaster if future Arduinos just stopped working randomly? Unclear is if this is going to ruin building up a perfboard Arduino as shown in the banner image. The full-swing oscillator was so robust that people were getting away with a lot of hacky designs and sub-optimal loading capacitor choices. Will those continue to work? Time will tell.

The bad news is that if you were using the full-swing oscillator to overcome electrical noise in your environment, you’re going to need to resort to an external oscillator instead of a simple crystal. This will increase parts cost, but might be the right thing to do anyway.

Whenever anyone changes your favorite chip, there’s a predictable kerfuffle on the forums. An Atmel representative said they can get you chips with the full-swing driver with a special order code. We’re thinking that they’re not going to let us special order ten chips, though, so we’re going to have to learn to live with the change.

The ATmega328 has already gotten a makeover, and the new version has improved peripheral devices which are certainly welcome. They don’t have the full-swing oscillator onboard, so you can pick some up now and verify if this change is going to be a problem for you or not. We don’t have any of the new chips to test out just yet.

Thanks to [Ido Gendel] for tipping us off to the change in our comment section! If you have any first-hand experience with the new chips, let us know in the comments and send in a tip anytime you trip over something awesome during your Internet travels.