The history of Commodore 8-bit computers ends with a fantastically powerful, revolutionary, and extraordinarily collectible device. The Commodore 65 was the chicken lip’ last-ditch effort to squeeze every last bit out of the legacy of the Commodore 64. Basically, it was a rework of a 10-year-old design, adding advanced features from the Amiga, but still retaining backwards compatibility. Only 200 prototypes were produced, and when these things hit the auction block, they can fetch as much as an original Apple I.

For their Hackaday Prize entry, resident hackaday.io FPGA wizard [Antti Lukats] and a team of retrocomputing enthusiasts are remaking the Commodore 65. Finally, the ultimate Commodore 8-bit will be available to all. Not only is this going to be a perfect replica of what is arguably the most desirable 8-bit computer of all time, it’s going to have new features like HDMI, Ethernet, and connections for a lot of FPGA I/O pins.

The PCB for this project is designed to fit inside the original case and includes an Artix A200T FPGA right in the middle of the board. HDMI and VGA connectors fill the edges of the board, there’s a connector for a floppy disk, and the serial port, cartridge slot, and DE9 joystick connectors are still present.

You can check out an interview from the Mega65 team below. It’s in German, but Google auto-generated and auto-translated captions actually work really, really well.

END_OF_DOCUMENT_TOKEN_TO_BE_REPLACED

This year at the Vintage Computer Festival, war was beginning. The organizers of the con pulled a coup this year, and instead of giving individual exhibitors a space dedicated to their wares, various factions in the war of the 8-bitters were encouraged to pool their resources and create the best exhibit for their particular brand of home computers. The battle raged between the Trash-80 camp and the Apple resistance. In the end, only one home computer exhibit would remain. Are you keeping up with Commodore? Because Commodore is keeping up with you. This exhibit from [Anthony Becker], [Chris Fala], [Todd George], and [Bill Winters] among others is the greatest collection of Commodore ever assembled in one place.

This year’s Commodore exhibit was a free for all of every piece of the hardware Commodore (or Zombie Commodore) has ever produced. Remember netbooks? Commodore made one. Remember when people carried dedicated devices to play MP3s? Commodore was there. Did you know you can spend $20,000 USD on a 30-year-old computer? That’s Commodore.

END_OF_DOCUMENT_TOKEN_TO_BE_REPLACED

This will come to no surprise to anyone who has ever talked to me for more than a few minutes, but one of my guilty Internet pleasures is heading over to eBay’s ‘vintage computing’ category, sorting by highest price, and grabbing a cup of coffee. It’s really just window shopping and after a while you start seeing the same things over and over again; Mac 512s with a starting bid far more than what they’re worth, a bunch of old PC-compatible laptops, and a shocking amount of old software. For the last week I’ve been watching this auction. It’s a Commodore 65 prototype – one of between 50 and 200 that still exist – that has over 60 bids, the highest for over $20,000 USD. It’s the most successful vintage computer auction in recent memory, beating out the usual high-profile auctions like Mac 128s and Altair 8800s. The most valuable home computer is the Apple I, but if you’re wondering what the second most valuable one is, here you go. 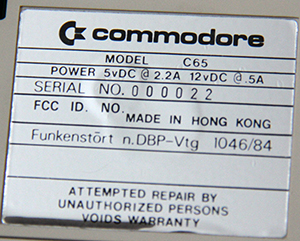 There’s still a little over five hours to go in the auction, but the current $21000 price should go even higher in the final hour; a C65 auction from a few years ago fetched $20100 for ‘a computer with missing parts’. This auction is for a complete, working system that has remained intact since it was discovered during the Commodore closing.

Update: Auction finished for $22,862.01 USD. For historical purposes, here’s a flickr album, a video, and another video.

If old and rare computers are your sort of thing, Hackaday will be at the VCF East this year.