If you only need to travel at around 25 mph around town or to get a short distance to work, an electric bicycle might just be the best thing you can ride. It’s cheap, quick, and fun, and sometimes a great way to get some exercise too. If you want to dial up the amount of excitement, though, you’re going to want something with a little more power and speed. Something like an old dirt bike converted to a 6 kW electric motorcycle.

This is the latest build from [Boom Electric Cycles] and uses the frame from an early-90s Suzuki dirt bike as the foundation. From there it’s all new, though, as the engine was removed and replaced with 3 kW hub motors in each of the wheels. A 72-volt custom battery with 240 18650 cells pushed the amps through the motors, making this bike able to keep up anywhere except the fastest highways (if it’s street legal at all…).

Having about eight times more power than is found in a typical electric bicycle is sure to be a blast, but this build isn’t quite finished yet. Some of the trim panels need to be finished and the suspension needs to be adjusted, but it looks like it’ll be out and about any day now. Until then you’ll have to be satisfied with other projects that managed to cram in 3 kW per wheel. 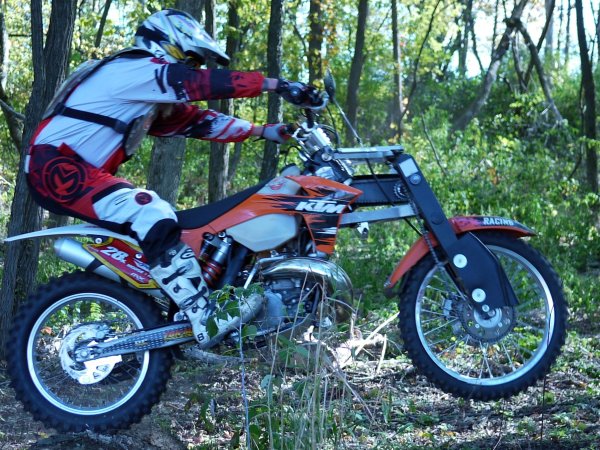 Take one look at the front fork of this dirt bike and you’ll notice that it’s not really a front fork at all. A custom front end replaces the traditional design in order to give this motorcycle all wheel drive. Look closely and you’ll see the chain that drives the front wheel. The swing-arm like addition lets the front end retain all of its suspension and steering and that’s where the project gets tricky.

We actually saw this thing in person at the monthly meeting of our local hackerspace: Sector67. [Martin Lawson] got his seven minutes of fame during the presentations (they use a prototype of this scoreboard to limit each presenter), and then was mobbed with a ton of interest afterwards. We were able to get a pretty good look at how the front drive works. It starts with an additional cog fastened beside the one that drives the chain for the back end. This feeds up through some tensioners and transfers out on the left side (from the rider’s perspective) of the front end. From here the rotational force is transferred to the right right and includes a U-joint to account for steering. The last chain goes straight down to the wheel.

The idea is that when the rear wheel loses traction you’re still being pulled by the front. This is illustrated well in the video after the break. [Marty] — who has a patent on the design — is trying to get some interest from manufacturers. He says the ability ride right through poor traction terrain make this a lot easier than a traditional dirt bike for beginners to ride. But it’s obvious the professionals are having fun on the thing as well!

END_OF_DOCUMENT_TOKEN_TO_BE_REPLACED From this view we would think the handmade wooden roadster (translated) was street legal. But it’s missing a few items that are required to take it out on the highway. The teenagers that built it were pulled over the other night (translated) and cited for driving without a speedometer or side indicator lights.

The image above shows the mark II of their design. Sadly they crashed the first version, which gave them a chance to overhaul the entire design. Now they have a proper frame which was welded from steel square tube. It’s got an impressive rack and pinion steering system and shock absorbing suspension in the front and rear. A dirt bike engine mounted behind the seats drives the rear wheels via a chain. They’ve used an Arduino to add turn signals, and have headlights for night driving.

[Gerrit] sent in the tip on this one and he figures that with an Arduino already being used in the vehicle it should be a quick fix to add a speedometer and get back on the road.