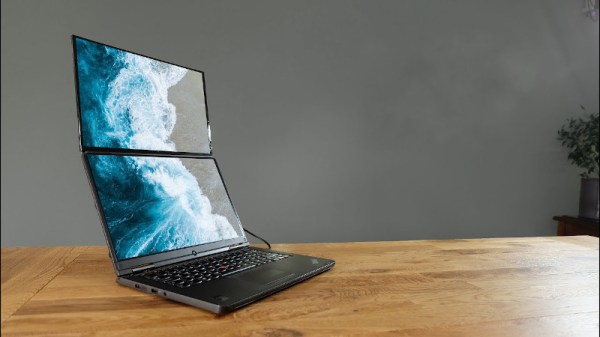 Laptops are great for portable productivity, but ergonomically they can leave something to be desired. They tend to force the user to look down, creating neck strain over extended periods. Rather than invest in expensive massages, [DIY Perks] decided what he really wanted was a dual screen laptop. So he built one! (Video embedded below.)

The build stats with a replacement laptop screen sourced from eBay, a nice full-HD IPS unit with a matching Embedded DisplayPort driver to enable the screen to be driven with the laptop’s existing HDMI port. To power the display, a USB-C Power Delivery board is used, in combination with a high-quality USB-PD compliant battery pack. This provides the 12 V required to run the screen.

To integrate the screen into the laptop, a set of 3D-printed hinges are used to create a folding mechanism, along with a brushed aluminium backing plate. Finished with a set of 3D-printed bezels, the final result is quite attractive from the front, looking almost stock at a glance.

It’s a build that may prove enticing to serious laptop professionals, particularly those that are willing to trade-off productivity against a little added bulk. We’ve seen other great work from [DIY Perks] before too, like these versatile LED panel lights. Video after the break.

END_OF_DOCUMENT_TOKEN_TO_BE_REPLACED 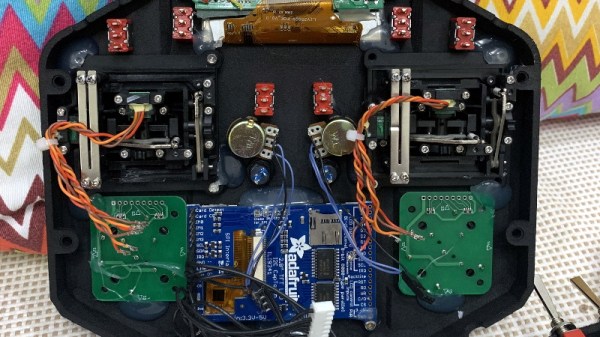 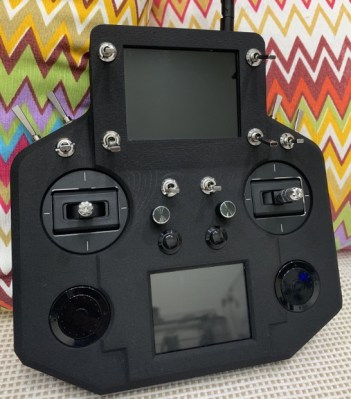 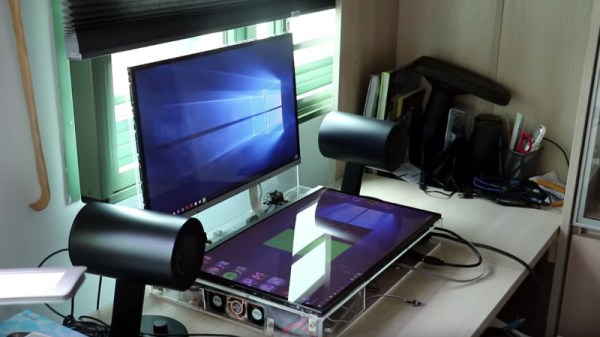 If you have an eye for obscure Microsoft products, you may be aware of the Microsoft PixelSense, a table-sized horizontal touchscreen designed as a collaborative workspace. It’s a multi-user computer with no traditional keyboard or mouse, instead multiple users work with documents and other files as though they were real documents on a table. It’s an impressive piece of technology, and it was the first thing that came to mind when we saw [Anitomicals C]’s dual screen portable computer. It has a form factor similar to a large laptop, in which the touchscreen folds upwards to reveal not a conventional keyboard and trackpad, but another identical touchscreen. The entire surface of the computer is a touch display with a desktop propagated across it, and in a similar way to the Microsoft product the user can work exclusively in the touch environment without some of the limitations of a tablet.

He freely admits that it is a prototype and proof of concept, and that is obvious from its large size and extensive use of desktop components. But he has brought it together in a very tidy Perspex case serving as an interesting class in creating a portable computer with well-chosen desktop components, even though with no battery it does not pretend to fit the same niche as a laptop. We’d be interested to see the same interface produced as a less bulky desktop-only version with solely the two monitors, because the horizontal touch screen is what sets this machine apart from other home-made ones.

Home made laptops are a regular sight on these pages, but some of them are a little more rough-and-ready.

END_OF_DOCUMENT_TOKEN_TO_BE_REPLACED

[Ezra] used the parts he had lying around to build a self-contained dual screen shop computer. What might one name such a project? Obviously you’d call it the Dr. FrankenComputer.

The lower monitor is a dell desktop flat screen. During prototyping [Ezra] used the stand to support everything. But to keep his work space clear the final version has been mounted to the wall in the corner of his lab. The upper display is the LCD from a Compaq laptop which he wasn’t using. The laptop still works and we believe that’s what is driving the Fedora system. A bracket mounted to the desktop screen’s inner skeleton supports the laptop screen and motherboard. One power supply feeds everything and connects to an outlet in the wall behind the monitors. The keyboard and mouse are wireless, as is the computer’s connection to the network.

The only thing we would worry about in our own shop is sawdust filling the heat sinks and other components of the motherboard. Perhaps his lab is electronic projects only or he has a dust cover that he uses when the system isn’t in use.