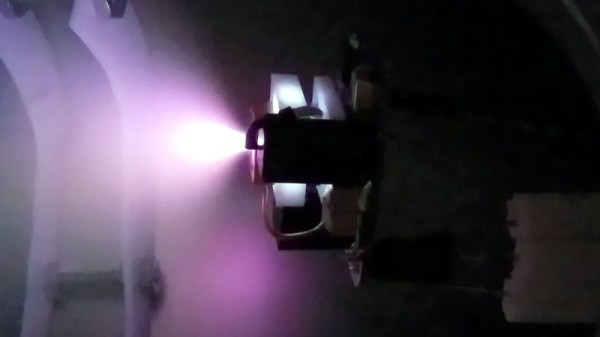 To place a satellite in orbit satisfactorily it is necessary not only to hitch a ride on a rocket, but also to put it in the right orbit for its task, and once it is there, to keep it there. With billions of dollars or roubles of investment over six decades of engineering behind them the national space agencies and commercial satellite builders solved these problems long since, but replicating those successes for open source microsatellites still represents a significant engineering challenge. One person working in this field is [Michael Bretti], who is doing sterling work with a shoestring budget on open source electric thrusters for the smallest of satellites, and he needs your help in crowdfunding a piece of equipment.

As part of his testing he has a vacuum chamber, and when he places a thruster inside it he has to create a space-grade vacuum . This is no easy task, and to achieve it he has two pumps. The first of these, a roughing pump, is a clapped-out example that has clearly reached the end of its days, and it is this that he needs your help to replace. His GoFundMe page has a modest target of only $4,200 which should be well within the capabilities of our community in reaching, and in supporting it you will help the much wider small satellite community produce craft that will keep giving us interesting things from space for years to come.

We’ve mentioned his work before here at Hackaday, and we hope that in time we’ll have a chance to look in more detail at his thrusters. Meanwhile you can follow along on Twitter.

Thanks [Bruce Perens K6BP] for the tip.