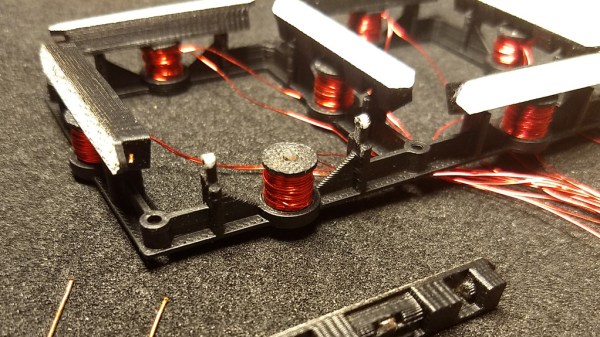 We love electromagnetic displays: take the modern look of a digital readout, combine with the low-tech coil mechanism that you theoretically could create yourself, add a dash of random clacking sounds, and what’s not to like? Evidently, [Nicolas Kruse] shares our affection for these displays, because he’s taken it beyond theory and created a 7-segment magnetically-actuated display from scratch.

The display is 3D-printed, as you would expect these days. Each segment contains a small neodymium magnet, and each coil a 1 mm iron core for flux concentration. The coils are driven with a 1.6 A peak current, causing the segments to flip in less than 10 ms. [Nicolas] provides STL files for the display base, segments, and spools so you can print your own display. He’s also released the schematics and code for the driver, which uses an ATtiny44 to drive the coils through N- and P-channel MOSFETs. Initially designed to drive a passive 4×7 matrix of displays, the driver couldn’t quite manage to flip one segment without affecting its neighbors. However, for a single display, the driver works fine. We hope he figures out the matrix issue soon, because we really want to see a clock made with these displays.

You can see (and hear) a short video of the display in action after the break. The clacking does not disappoint!

END_OF_DOCUMENT_TOKEN_TO_BE_REPLACED 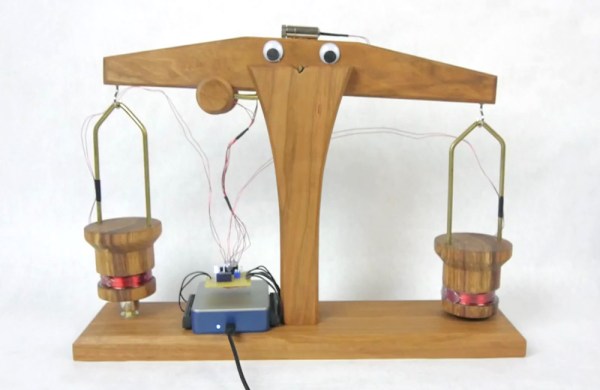 Machined from a chunk of a virtually indestructible platinum-iridium alloy, the international prototype kilogram (IPK) was built to last for an eternity. And yet, being the last remaining, physical artifact in a club of fundamental SI units, the current definition of the kilogram has worn out. Most certainly the watt-balance will take its place, and redefine the kilogram with a true, physical phenomenon. [Grady] just built his own watt-balance from scratch, and he provides you with a decent portion of scientific background on the matter.