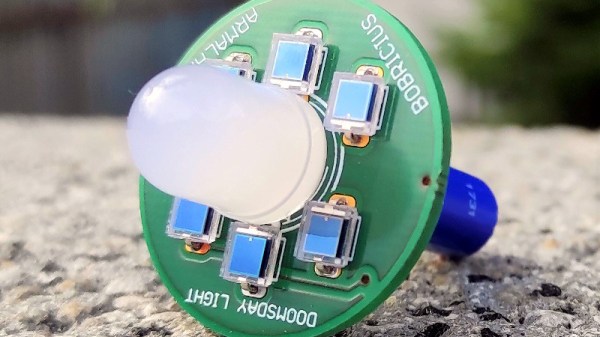 Instant access to electric light is a luxury that most of us take for granted, but in times of crisis, the power is often the first thing to go. So whether you’re worried about a natural disaster or the outbreak of war, a reliable source of light is a must-have in your emergency kit. Creator [bobricius] calls his is ArmaLamp the “Armageddon resistant night lamp”, and while we’re not eager to test that particular claim, it certainly looks robust enough to get you through some tough times. 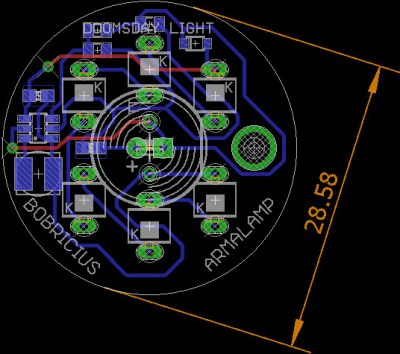 The basic idea behind the ArmaLamp is to make a light source so simple that, outside of being physically destroyed, it can’t fail. That means deleting the mechanical power switch and designing the circuit so the LED light will kick on automatically in the dark. Rather than using a traditional rechargeable battery, the solar powered ArmaLamp stores its charge in a 10 farad supercapacitor that can be charged and depleted daily without having to worry about long-term degradation.

Charging the ArmaLamp with a simple solar cell is clearly out of the question as it would represent not just a single point of failure, but a particularly fragile one at that. Instead, [bobricius] is using an array of six BPW34 photodiodes that come in a hard plastic package. Combined with an efficient driver circuit that can run the LED even when the supercap is down to 0.3 V, leaving the ArmaLamp outside during the day should provide you with four hours of ultra-reliable light every night.

END_OF_DOCUMENT_TOKEN_TO_BE_REPLACED 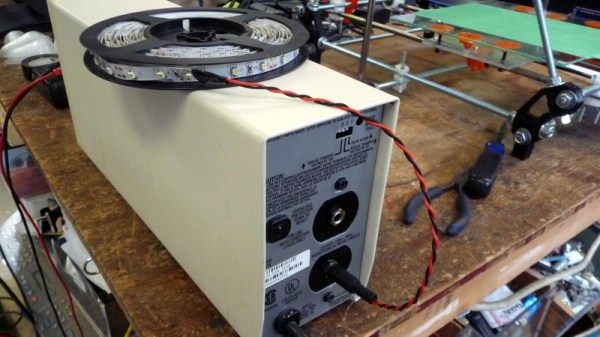 We know your shame. Like you, we wanted to save some scratch and bought the bottom-of-the-range UPS, only to discover that it is no use to man or beast as it lacks the power to perform any reasonable task. It’s now sitting in a corner, to gather dust as its batteries deteriorate.

Not so fast with the UPS abandonment! [rue_mohr] came up with a modification for a small APC UPS that turned it into something a little more useful. Removing the mains inverter from the picture with a few displaced wires and PCB mod, the UPS is now a 12V battery with a mains charger and power outage detection built-in. In this state it’s the perfect power pack for some 12V LED strips used for emergency lighting. There is a handy 3D print that fits the rear socket cut-outs on the US version of the device and provides apertures  for a pair of DC power jacks.

This is a relatively simple hack, but we like it for taking the focus away from the obvious part of the UPS, its mains inverter, and turning to the batteries as the main event. It’s a relatively tiny device, but in the past we’ve featured a UPS at the other end of the scale being used for power back-up to a whole house. Meanwhile we’d like to take a leaf from the [BOFH]’s book, and recommend that the most important piece of infrastructure requiring a UPS is the sysadmin’s coffee machine.