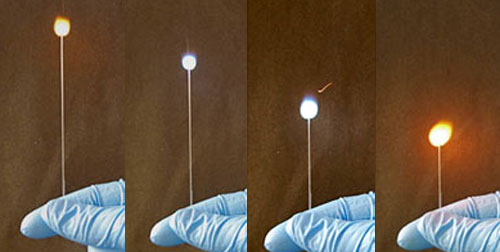 A group of Harvard chemists have come up with a novel use for fire. Through experimentation, they have been able to build what they call an InfoFuse. As the name implies, it’s essentially a burning fuse that can “transmit” information.

The fuse is made from flash paper, which is paper made from nitrocellulose. Flash paper burns at a relatively constant speed and leaves no smoke or ash, making it ideal for this type of project. The chemists developed a method of conveying information by changing the color of the flame on the paper. You might remember from high school chemistry class that you can change the color of fire by burning different metal salts. For example, burning copper can result in a blue flame. This is the key to the system.

The researchers dotted the flash paper with small bits of metal salts. As the flame reaches these spots, it briefly changes colors. They had to invent an algorithm to convert different color patterns to letters and numbers. It’s sort of like an ASCII table for fire. Their system uses only three colors. The three colors represent eight possible combinations of color at any given time. Just two quick pulses allow the researchers to convey all 26 letters of the English alphabet as well as ten digits and four symbols. In one test, the researchers were able to transmit a 20 character message in less than 4 seconds.

[Ben Krasnow] found the Harvard project and just had to try it out for himself. Rather than use colors to convey information, he took a more simple approach. He started with a basic strip of flash paper, but left large tabs periodically along its length. As the paper burns from end to end, it periodically hits one of these tabs and the flame gets bigger momentarily.

[Ben] uses an optical sensor and an oscilloscope to detect the quantity of light. The scope clearly shows the timing of each pulse of light, making it possible to very slowly convey information via fire. Ben goes further to speculate that it might be possible to build a “fire computer” using a similar method. Perhaps using multiple strips of paper, one can do some basic computational functions and represent the result in fire pulses. He’s looking for ideas, so if you have any be sure to send them his way! Also, be sure to check out Ben’s demonstration video below. END_OF_DOCUMENT_TOKEN_TO_BE_REPLACED

Reader, [Michael Rubenstein], sent in a project he’s been working on. Kilobot, as stated in the paper(pdf), overcomes the big problems with real world swarm robotics simulations; cost, experiment setup time, and maintenance. The robot can be communicated with wirelessly, charged in bulk, and mass programmed in under a minute. Typically, robots used for swarm research cost over a $100, so large scale experiments are left to software simulation. These, however, rarely include the real world physics, sensor error, and other modifying factors that only arise in a physical robot.  Impressively enough, the kilobot comes in far under a hundred and still has many of the features of its costlier brothers. It can sense other robots, report its status, and has full differential steer (achieved, surprisingly, through bristle locomotion). There are a few cool videos of the robot in operation on the project site that are definitely worth a look.