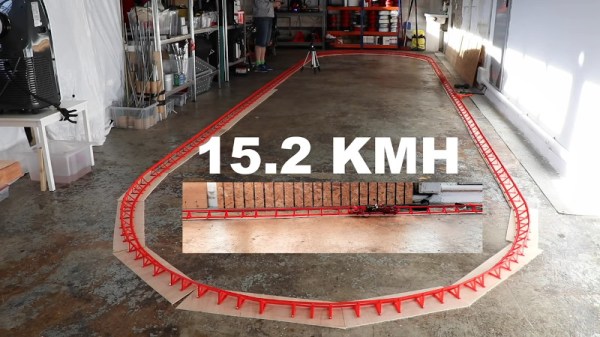 END_OF_DOCUMENT_TOKEN_TO_BE_REPLACED

At Maker Faire this weekend. tucked in between a building full of homegrown foodstuffs and a rock polishing booth is the Bay Area Garden Railway Society (BAGRS). They’re running a few live steam locomotives, and they’re beautiful works of engineering and modeling. None of these trains are electric; they all move by boiling water with either coal or butane. It’s a true, proper locomotive running on 45mm gauge track.

[David Cole] of BAGRS gave me the walkthrough of their booth. It’s a simple oval track that took a solid day to level out. There are technically three sets of tracks, two G-scale, and another O scale sharing a rail with a G-scale track. Each and every one of these locomotives is powered by steam produced when water is heated by either coal or butane. Butane is the fuel of choice because of its ease of acquisition, but BAGRS had a few coal-fired locomotives with tiny shovels shoveling anthracite into tiny fireboxes. After loading up with water and getting the firebox nice and hot, these locomotives will cruise around the oval track for about half an hour, with the speed of the locomotive controlled by a servos and RC gear.

Maker Faire isn’t the headline event for BAGRS; in July 2016 they’ll be hosting the National Garden Railway Convention in San Francisco. If you’re local to the Faire, it will be a cool event to check out.

Flexiscale, the company that crowdsources and crowdfunds model kits, made a showing at the World Maker Faire. We’ve seen their work before, but this time we got to touch base with [Chris Thorpe] and get a handle on the future of user-requested model kits.

Right now there are over one hundred proposals for what Flexiscale should do next. They’re mostly narrow gauge railroad locomotives and rolling stock, but [Chris] tells me they’re looking to branch out into larger projects including American locomotives as well as planes, ships, and buildings. This is a really, really cool project, and if you’re into models at all, you should at least be aware of what Flexiscale is trying to do.

If you have an idea of what Flexiscale should do next, write up a proposal. I made one for the PRR GG1 electric locomotive, and if enough people support it, [Chris] will scan an engine and make a kit. 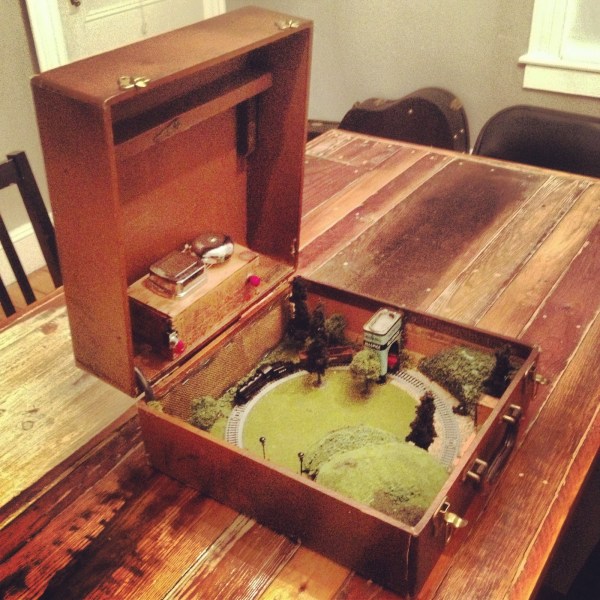 END_OF_DOCUMENT_TOKEN_TO_BE_REPLACED

For reasons we can’t comprehend, model train layouts are  incredibly popular in Germany. [Gerhard] is one of those model train aficionados that has moved far beyond a layout with a transformer controlling the speed of the train; he sent in a tip for a very tiny Rocrail server he built to control the locomotives moving across his layout.

[Gerhard] uses Rocrail – a control system for train layouts large or small. Rocrail comes in both client and server configurations. The client is able to run on iDevices or Android. [Gerhard]’s server runs on a very tiny Linux computer tucked away under the layout.

Instead of a Raspberry Pi ([Gehard] couldn’t get one in time for this build), he used a Carambola board. The Rocrail server is installed on this single board computer and connects to a CAN bus controller. It’s a step up from [Gehard]’s previous CAN/Ethernet gateway built around OpenWRT, and makes the entire device much smaller.

[Gehard] doesn’t have a video of his layout in action, but after the break you can see how much the German people love their model trains at Miniatur Wunderland in Hamburg.

END_OF_DOCUMENT_TOKEN_TO_BE_REPLACED