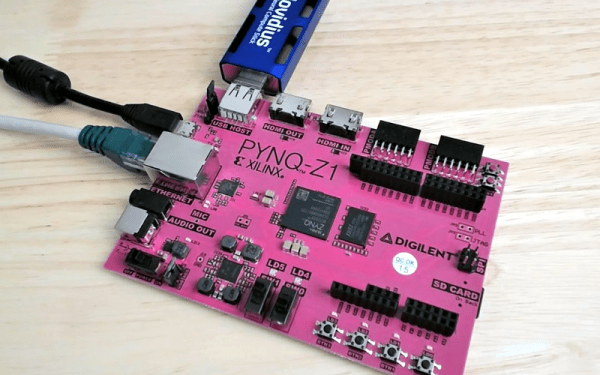 They probably weren’t inspired by [Jeff Dunham’s] jalapeno on a stick, but Intel have created the Movidius neural compute stick which is in effect a neural network in a USB stick form factor. They don’t rely on the cloud, they require no fan, and you can get one for well under $100. We were interested in [Jeff Johnson’s] use of these sticks with a Pynq-Z1. He also notes that it is a great way to put neural net power on a Raspberry Pi or BeagleBone. He shows us YOLO — an image recognizer — and applies it to an HDMI signal with the processing done on the Movidius. You can see the result in the first video, below.

At first, we thought you might be better off using the Z1’s built-in FPGA to do neural networks. [Jeff] points out that while it is possible, the Z1 has a lower-end device on it, so there isn’t that much FPGA real estate to play with. The stick, then, is a great idea. You can learn more about the device in the second video, below.

END_OF_DOCUMENT_TOKEN_TO_BE_REPLACED

FPGAs are the future, and there’s a chip out there that brings us the future today. I speak, of course, of the Xilinx Zynq, a combination of a high-power ARM A9 processor and a very capable FPGA. Now the Zynq has been made Pynq with a new dev board from Digilent.

The heart of this board, is, of course, the Xilinx Zynq packing a Dual-core ARM Cortex A9 processor and an FPGA with 1.3 Million reconfigurable gates. This is a dev board, though, and with that comes memory and peripherals. To the board, Digilent added 512MB of DDR3 RAM, a microSD slot, HDMI in and out, Ethernet, USB host, and GPIOs, some of which match the standard Arduino configuration.

This isn’t the first Zynq board out there by any measure. Last year, [antti] had a lot of fun with the Zynq and created the ZynqBerry, a Zynq in a Raspberry Pi form factor, and a Zynq Arduino shield. Barring that, we’ve seen the Zynq in a few research projects, but not so much in a basic dev board. The Pynq Zynq is among the first that will be produced in massive quantities.

There is, of course, one downside to the Pynq Zynq, and that is the price. It’s $229 USD, or $65 with an educational discount. That’s actually not that bad for what you’re getting. FPGAs will always be more expensive than an SoC stolen from a router or cell phone, no matter how powerful it is. That said, putting a powerful ARM processor and a hefty FPGA in a single package is an interesting proposition. Adding HDMI in and out even more so. Already we’ve seen a few interesting applications of the Zynq like synthesizers, quadcopters, and all of British radio. With this new board, hopefully a few enterprising FPGA gurus will pick one up and tell the rest of us mere mortals how to do some really cool stuff.