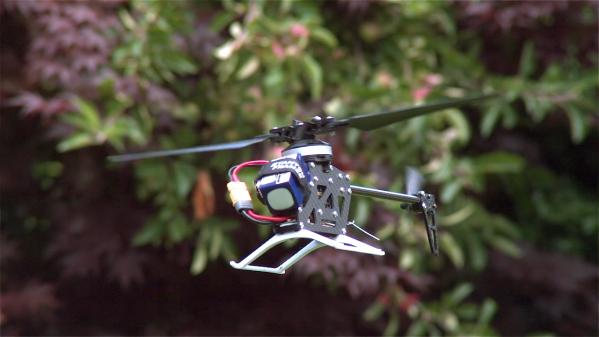 They say that drummers make the best helicopter pilots, because to master the controls of rotary-wing aircraft, you really need to be able to do something different with each limb and still have all the motions coordinate with each other. The control complexity is due to the mechanical complexity of the swashplate, which translates control inputs into both collective and cyclical changes in the angle of attack of the rotor blades.

As [Tom Stanton] points out in his latest video, a swashplate isn’t always needed. Multicopters dispense with the need for one by differentially controlling four or more motors to provide roll, pitch, and yaw control. But thanks to a doctoral thesis he found, it’s also possible to control a traditional single-rotor helicopter by substituting flexible rotor hinges and precise motor speed control for the swashplate.

You only need to watch the slow-motion videos to see what’s happening: as the motor speed is varied within a single revolution, the tips of the hinged rotor blades lead and lag the main shaft in controlled sections of the cycle. The hinge is angled, which means the angle of attack of each rotor blade changes during each rotation — exactly what the swashplate normally accomplishes. As you can imagine, modulating the speed of a motor within a single revolution when it’s spinning at 3,000 RPM is no mean feat, and [Tom] goes into some detail on that in a follow-up video on his second channel.

It may not replace quadcopters anytime soon, but we really enjoyed the lesson in rotor-wing flight. [Tom] always does a great job of explaining things, whether it’s the Coandă effect or anti-lock brakes for a bike.

END_OF_DOCUMENT_TOKEN_TO_BE_REPLACED 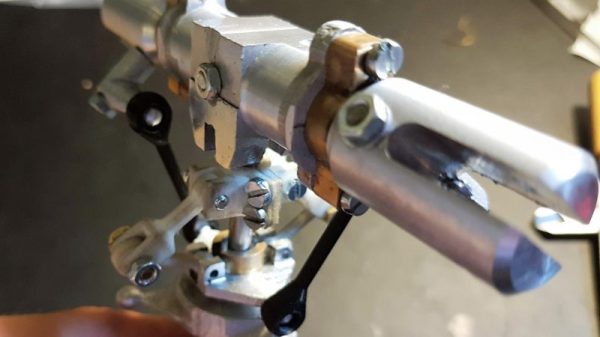 While quadcopters seem to attract all the attention of the moment, spare some love for the rotary-wing aircraft that started it all: the helicopter. Quads may abstract away most of the aerodynamic problems faced by other rotorcraft systems through using software, but the helicopter has to solve those problems mechanically. And they are non-trivial problems, since the pitch of the rotors blades has to be controlled while the whole rotor disk is tilted relative to its axis.

The device that makes this possible is the swashplate, and its engineering is not for the faint of heart. And yet [MonkeyMonkeey] chose not only to build a swashplate from scratch for a high school project, but since the parts were to be cast from aluminum, he had to teach himself the art of metal casting from the ground up. That includes building at least three separate furnaces, one of which was an electric arc furnace based on an arc welder with carbon fiber rods for electrodes (spoiler alert: bad choice). The learning curves were plentiful and steep, including getting the right sand mix for mold making and metallurgy by trial and error.

With some machining help from his school, [MonkeyMonkeey] finally came up with a good design, and we can’t wait to see what the rest of the ‘copter looks like. As he gets there, we’d say he might want to take a look at this series of videos explaining the physics of helicopter flight, but we suspect he’s well-informed on that topic already.