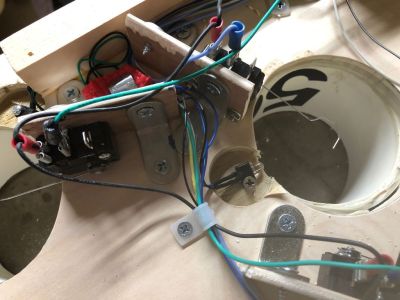 There are a lot of hackerspaces and maker labs all around the world that have amazing capabilities for manufacturing. Mills, lathes, drill presses, laser cutters, and CNC routers are no stranger to the any maker’s arsenal of tools. Do you know what isn’t? A DIY Skeeball machine.

This, ‘should be a project for every hackerspace’ project is the brainchild of [fungus amungus] over on Instructables. Despite what you might think about the complexities of building a Skeeball machine, [fungus’] build is actually rather simple, and also easily transportable.

The main material used in the build is seven sheets of 3/4″ plywood. These sheets were cut out on a ShopBot CNC router, and held together with screws in a tab-and-slot construction scheme. The playfield is covered with cork for what we assume is a proper Skeeball experience, and all the electronics controlled by an Arduino and Laptop.

The electronics for this build are very simple – just a few IR distance sensors mounted under the holes. The laptop is running a Processing sketch to display the score on a TV above the cage, allowing for some improvements in the gameplay and scoring system of the original Skeeball machines.

It’s a really fantastic project, and something that we’re sure will be the center of attention wherever [fungus] brings it.

END_OF_DOCUMENT_TOKEN_TO_BE_REPLACED

We don’t really know what to say. This Skeeball cabinet is built entirely from Knex. It works exactly how you’d expect Skeeball to work. You plug in quarter and it dispenses balls and keeps score.

[Shadowman39] worked on the build for more than a year. Everything that went into it is a Knex part with the exception of a few rubber bands, and the paper numbers that are used on the scoreboard. There are six motors which drive the machine. Four of them are responsible for turning the scoreboard digits, the others handle ball return.

The link at the top starts off with a bunch of images of the various parts, but you’ll want to watch the video after the break for a closer look. It shows the coin hopper in greater detail. It’s built to only accept quarters and to reject all other coins.