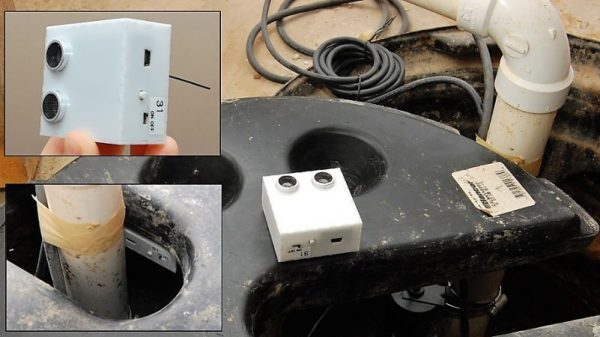 Nobody likes to monitor things as much as a hacker, even mundane things like sump pumps. And hackers love clean data too, so when [Felix]’s sump pump water level data was made useless by a new pump controller, he just knew he had to hack the controller to clean up his data.

Monitoring a sump pump might seem extreme, but as a system that often protects against catastrophic damage, the responsible homeowner strives to take care of it. [Felix] goes a bit further than the average homeowner, though, with an ultrasonic sensor to continually measure the water level in the sump and alert him to pending catastrophes. Being a belt and suspenders kind of guy, he also added a float switch to control the pump, but found that the rapid cycle time made his measurements useless. Luckily the unit used a 555 timer to control the pump’s run time after triggering, so a simple calculation of the right RC values and a little solder job let him increase the on time of the pump. The result: a dry basement and clean data.

We recently discussed the evolution of home automation if you want to know more about the systems that sensors and actuators like these can be part of. Or for a more nuts and bolts guide to networking things together, our primer on MQTT might help.