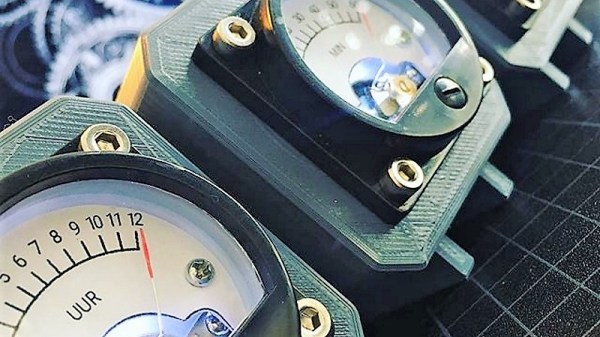 Around Father’s Day each year, we usually see a small spate of dad-oriented projects. Some are projects by dads or granddads for the kids, while others are gifts for the big guy. This analog meter clock fits the latter category, with the extra bonus of recognizing and honoring the influence [Micheal Teeuw]’s father had on him with all things technological.

[Michael] had been mulling over a voltmeter clock, where hours, minutes and seconds are displayed on moving coil meters, for a while.  A trio of analog meters from Ali Express would lend just the right look to the project, but being 200-volt AC meters, they required a little modification. [Michael] removed the rectifying diode and filtering capacitor inside the movement, and replaced the current-limiting resistor with a smaller value to get 5 volts full-range deflection on the meters. Adobe Illustrator helped with replacing the original scales with time scales, and LEDs were added to the meters for backlighting. A TinyRTC keeps time and generates the three PWM signals to drive the meters. Each meter is mounted in its own 3D-printed case, the three of which are linked together into one sleek console. We love the look, which reminds us of an instrument cluster in an airplane cockpit.

Bravo to [Michael’s Dad] for getting his son into the tinkering arts, and cheers to [Michael] on the nice build. We like seeing new uses for old meters, like these server performance monitoring meters.