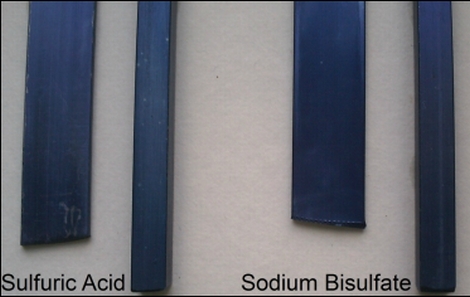 While many people have tried their hand at anodizing aluminum at home, there are plenty who would just as soon leave it up to the professionals due to the highly concentrated sulfuric acid required for the process. [Ken] started thinking about the process and wondered if there was a way to get comparable results using chemicals that are easier to obtain and dispose of.

Through some experimentation he found that sodium bisulfate (NaHSO4), which is a sodium salt of sulfuric acid, can easily be used in its place with great results. The chemical is typically advertised in hardware and pool stores as “Aqua Chem”, and can be had at a very reasonable price. When paired with the proper DC current along with a cathode, the sodium bisulfate easily anodizes an aluminum workpiece and renders it ready for coloring with RIT, readily available cloth dye.

We were impressed with the results, and when looking at [Ken’s] test pieces, it seems that the metal dyed with sodium bisulfate has a more uniform, less streaky coloring to it. It’s also worth mentioning that [Ken] has found it is fairly easy to etch the aluminum before anodizing using a solution of sodium hydroxide, which is great for individuals who prefer a more matte finish.

If this is something that interests you, be sure to swing by his site. He has a posted nice video overview of the process that may be of some help. If you have one of those annoying dancing (Santa/Elvis/Frankenstein) decorations sitting around collecting dust, you could always repurpose it like [mischka] did. He originally wanted to enter our Santa-Pede challenge and purchased a dancing Santa, but time eventually got the best of him. With no other use for it in mind, he decided to make his dancing Christmas toy into a fun Halloween decoration.

An electronic rendition of “Jingle Bells” isn’t exactly the scariest thing around, so he dismantled the dancing toy and started fiddling with the sound board. A few well placed resistors later, his circuit-bent Santa Claus started to sound like he had five too many egg nogs, which was perfect for the dancing mummy [mischka] had in mind.

He transplanted some LEDs from Santa’s base into his head, and masked it off with some electrical tape so that only the eyes were visible. He then wrapped the mummy in the requisite bloodied bandages and set him out for the kids to enjoy.

Since it’s hard to find someone who genuinely likes these dancing toys, we think this is a great way to make them useful again. If you’ve got a few of these things kicking around, we suggest reenacting the dance routine from Thriller using an army of Santa-zombies and sending a video our way.

Continue reading to see a video of [mischka’s] mummy in action.

END_OF_DOCUMENT_TOKEN_TO_BE_REPLACED [Knife141] lets this monkey push him around all day long. It’s a whimsical touch for his scratch-built electric scooter. He started the build without a set of plans, cutting angle iron and clamping it together until the frame looked about right. Once the welding was done, he began adding all the parts to make it functional. There are front and rear brakes, operated by a lever on the handlebars. The rear wheel has a sprocket bolted to it, along with some spacers to give the chain adequate clearance.

Inside the saddle enclosure you’ll find a set of three lead-acid batteries. These are 12 volt 10 amp models that provide 36 volts of juice to the electric motor. The only thing we know about the electronics is that both the motor and the controller were purchased at a surplus store.

The sock monkey that pushes him around is sort of an afterthought. But since it’s just a couple of wheels with the feet attached, this might make a fun project for the kids to add to a bike. END_OF_DOCUMENT_TOKEN_TO_BE_REPLACED

[Oskar] has been making puzzles for some time now. In 2000, he made a small electromechanical 4-bit maze that’s really fun to play. Lately though, he’s been working on an improved version that could be the beginnings of a commercial product.

The earlier electromechanical maze (you can play it in an applet on that page) is just a microcontroller hooked up to electromagnets and switches. To complete the maze, find the patterns of bits that move everything from 0 to 1. It’s a little bit like the Fox Chicken Grain puzzle, only a bit more complicated.

[Oskar]’s latest version uses motorized faders to represent the 0 and 1 states of the bits. The same logic in the electromechanical version is in the newest version. An Ardunio takes care of the motor control and game logic.

As a tiny logic game toy, it’s a great idea; everybody needs to get some hands-on action with Karnaugh maps sometime in their life. Check out the video below for the demo of the 4-bit maze in action.