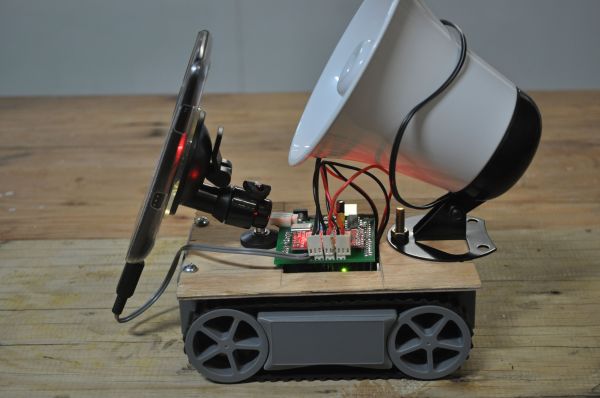 We have no idea why, but since we featured Botiful, the Android-powered telepresence robot a few days ago, the tip line has been awash in robot/Android mashups. Here’s a few of the cool ones.

Using an Android as a remote control

[Stef] used a Samsung Galaxy S3 to control an old rc tank. The Android sends accelerometer and gyro data over Bluetooth to an Android where it powers a pair of H-bridges to turn the wheels.

Last May, [Josh] wrote in asking if a tread-based robot controlled through Skype would be a cool idea. We said ‘hell yeah’ and [Josh] scurried off to his workshop for a few months. He’s back with his tank-based robot. One really interesting bit is the robot responds to DTMF tones, allowing it to be controlled through Skype without any additional hardware. That’s damn clever. You can see a video of the SkypeRobot after the break.

END_OF_DOCUMENT_TOKEN_TO_BE_REPLACED

Last weekend at the Detroit Maker Faire, the folks at the Lansing Makers Network brought a large-scale version of the classic electronic board game Operation.

MegOperation, as the Lansing hackerspace calls their build, is a gigantic printout of the chronically ill guy from Operation plastered onto a sheet of plywood. Wire loops surround each incision to detect when a surgeon’s unsteady hand when retrieving unnecessary body parts. These wire loops are connected to an Arduino that regulates the bell and light-up nose the team didn’t quite have time to finish.

Even though the team used an Arduino for their large-scale version of Operation – a game that doesn’t require any electronics besides a battery, wire, and buzzer – breaking out each body part to a separate Arduino pin seems pretty smart. A processing app keeps track of the time elapsed for each operation and can detect when the wire surrounding a particular incision is touched, perfect for competitive Operation play.

It may not be as cool as a bear riding a jet ski on a shark in outer space, but Stompy, the giant, rideable walking hexapod comes very close.

A few months ago, we caught wind of a gigantic rideable hexapod project brewing at the Artisan’s Asylum hackerspace in Somerville, MA. The goal was to build an 18-foot wide, two ton rideable hexapod robot, with the side benefit of teaching students how to weld, code, and other subjects related to giant machines and mechatronics.

The Stompy team has now launched a Kickstarter asking for donations to pay for the materials, plasma cutting, and other bits of hardware required to make Stompy a reality. Since there isn’t much information on amateur level hydraulics, the project is open source; the trials of building Stompy will be made public freely available for any other giant robot project.

Team Stompy has successfully built, debugged, and tested a half-size prototype of one hydraulically powered leg that is able to ‘row’ across the floor under its own power. This is a huge achievement for the team and now they’ll move on to the full-size single leg prototype.

You can see the team’s single leg prototype in action after the break.

END_OF_DOCUMENT_TOKEN_TO_BE_REPLACED

Here’s some very, very sad news from [Charles] over at The Maker’s Workbench: on July 16th, his house was hit by lightning causing his workshop to catch fire. His family is safe, but unfortunately thousands of dollars in gear has gone up in smoke. [Charles] lost a Reprap, a ton of dev boards, a huge amount of tools including an awesome soldering setup, and his laptop and file server.

Short of taking up residence inside Yucca Mountain, there’s little that can be done to prevent random, disastrous acts of Thor. The only bright side to [Charles]’ ordeal (if there is one) is that most of his file server – including all the code he’s written over the years – was backed up on the cloud.

Hackaday readers aren’t much for marketing buzzwords like ‘the cloud,’ so we’re wondering what your backup solutions are. If the cloud isn’t for you, is a NAS at home a good idea? rsync will do wonders, but even hard drives at an off-site location fail; maybe tape is the best choice. Of course if you have a laser cutter, there’s always the option of cutting patterns of holes in stainless steel plates and preserving your data for thousands of years.

If [Charles]’ story doesn’t inspire you to backup often and preserve your data, consider this: the greek poet [Sophocles] wrote 123 plays, seven of which still survive. Put in perspective, that’s like the only songs in The Beatles’ catalog surviving 2,500 years coming from the Yellow Submarine soundtrack. [Tim Caswell] has been using gamepads and joysticks to demonstrate his node.js hacks for a long time. The thing is, he has been relying on C++ bindings to handle the hardware while trying to herald the praises of node.js. Why not cut out the middle man and write a joystick driver in node.js? It turns out to be so simple anyone can do it.

Granted, this is not a kernel driver. He’s relying on the Linux kernel to recognize the hardware and provide him with the customary /dev/js0 file which he can then work with. As you can see in the snippet above, he’s looping through code in order to constantly read from the hardware. To get this far he dug through the documentation for joystick packets (yay for open source!) to find that each is made of a 32-bit timestamp, a 16-bit value, and two 8-bit numbers identifying the event type and button or axis.

Once he has the packets, it’s off to the races. Each data type is parsed into an appropriate variable which you can use in the logic of your own program. Don’t be nervous, this will make a great weekend project!