Take the party with you by building your own boomcase. It’s an amplifier and set of speakers built into luggage. It uses an audio jack to connect to your favorite music player, and with a bit of  added protection — like grills for those speakers — it could still be gently used to transport your wardrobe.

A 1960’s suitcase was mutilated for this build. [Jay] must have already had it on hand because combined with some used parts he claims to have only spent $50 total. After trying out a few different speaker orientations on a piece of cardboard he covered the outside of the case in blue painter’s tape and started cutting holes. The amp he chose has a nice face plate which happens to  fit nicely on the top side of the case. For now he’s powering it with a 10,000 mAh (ie: 10 Ah) portable device recharging battery. But as you can hear in the demo after the break this seems to have no problem supplying the system with enough power.

END_OF_DOCUMENT_TOKEN_TO_BE_REPLACED You’ll find this used book vending machine at The Monkey’s Paw in Toronto, Canada. For two Loonies you can buy a random book from the machine’s hopper. Silly? Absolutely. But as you can see from the video after the break, the act of buying a book this way is a lot of fun, and we always like to see the insides of a machine like this.

[Craig Small’s] creation looks vintage, and the chugga-chugga and mechanical bell that accompany each sale go along well with that appearance. Of course the machine is new. A trio of hoppers behind the façade hold stacks of books at a forty-five degree angle. Each stack is raised one at a time by a winch and pulley. Once the top book on the stack is high enough to slide into the dispenser chute the winch stops and the bell rings. A simple solution to dispensing something that is not a standard size.

Because the Biblio-Mat is meant to clear out the discount books, slight damage caused by falling down the chute won’t even be noticed. And if you end up really loving the book you can digitize it by running it through one of these.

END_OF_DOCUMENT_TOKEN_TO_BE_REPLACED Here’s a little smoke detector hack which [Ivan] has been working on. He wanted to extend the functionality of a standard detector and we’re happy to see that he’s doing it with as little alteration to the original equipment as possible (this is a life-saving device after all). He sent all the build images for the project to our tips line. You’ll find the assembly photos and schematic in the gallery after the break.

As you can see his entry point is the piezo element which generates the shrill sound when smoke as been detected. He connected this to his own hardware using an optoisolator. This allows him to monitor the state of the smoke alarm on his server. It then takes over, providing a webpage that display’s the board’s temperature sensor value and streams video from an infrared camera.

Of course this is of limited value. We’ve always made sure that our home was equipped with smoke detectors but the only time they’ve ever gone off was from normal cooking smoke or after an extremely steamy shower. But still, it’s a fun project to learn from and we’ve actually got several of the older 9V battery type of detectors sitting in our junk bin.

END_OF_DOCUMENT_TOKEN_TO_BE_REPLACED END_OF_DOCUMENT_TOKEN_TO_BE_REPLACED

[Kevin]’s friend is a remarkably helpful engineer, and when his friend gets requests to help out on a few projects he always has a hard time saying no. Really, [Kevin]’s friends’ time is much too valuable to take up many more projects, but saying no to someone will drag you down. To  alieve his friend of the torment of saying no, [Kevin] built an automated Gmail assistant that will automatically replay to an annoying email with the words, “Go F*** Yourself!”.

The automated Gmail assistant is built around a Teensy 2.0 microcontroller equipped with a key that serves as a safety, lest an accidental “F*** you” be sent to friends, family, or employers.

If [Kevin]’s friend feels bad for telling so many people off there’s also a handy feature to make sure the engineer friend doesn’t seem too unhelpful: there’s a one percent chance of the Gmail assistant of replying with, “That’s a Great idea, I’ll get right on it!”. 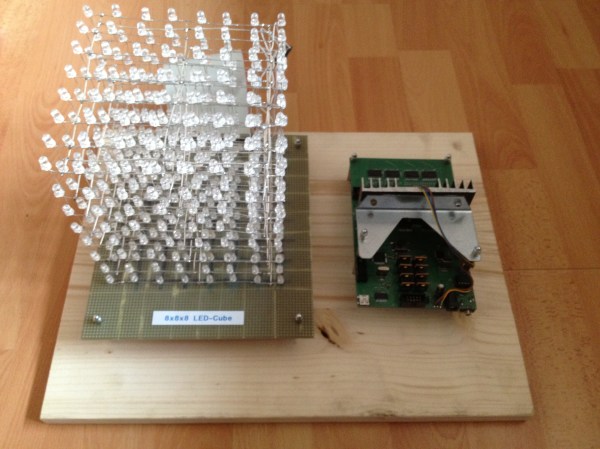 Check out the LED cube which [Thomas], [Max], and [Felix] put together. But don’t forget to look at that beautiful PCB which drives it… nice! But hardware is only part of what goes into a project like this one. After the soldering iron had cooled they kept going and wrote their own software to generate patterns for the three-dimensional display.

Looking at a clean build like this one doesn’t drive home the amount of connections one has to make to get everything running. To appreciate it you should take a look at this other 512 LED cube which has its wires showing. You can see from the schematic (available in the project repository) that all of these lines are managed by a series of shift registers. The board itself connects to a computer from which it gets the visualization commands. A Java program they call CubeControl can push letters or turn the cube into a VU meter.

The team built at least two of these. This smaller version uses red LEDs, while the larger one shown in the video after the break has blue ones.

END_OF_DOCUMENT_TOKEN_TO_BE_REPLACED

As [unicorn] described it, “this is no big thing.”  We would agree, but a grinder made from a hard disk drive at least deserves to be in a [HAD] links post. Here’s the original source.

What do you get when take [Sub Hunt] and take away the ability to see what you’re playing with? The No-Video Game is what [Sean] at [Hive76] came up with. Thanks [Kyle] for writing in to tell us about it!

[Paul] wrote in to tell us about his friend [Ahmad’s] discovery that you can cut a standard SD card in two and still have it function. Sure, some people know this, but we’d be willing to bet most don’t. In the pictures provided, it makes for a nice upgrade to the Raspberry Pi’s form factor.

[Hamster] wrote in to tell us about how he added an FM tranmitter to his field programmable gate array project. Check out the wiki for the code to do this with, or this Youtube video to see it in action!

Although there’s only a Youtube video to describe this hack, it’s really worth seeing.  Some people might go with a pure electrical method to open up their Garmin GPS, but why do that when you can “just” create an array of fingers to do it for you! Thanks [David] for the tip!