The Stockholm Mini Maker Faire 2014 has just finished up, and [Johnny Eriksson] was awarded the Maker of the Year award for his very impressive electromechanical one man band.

As a musician/electrician/furniture carpenter, [Johnny] has quite a few skills — and he wanted to try putting them altogether for a project. He calls it the Popmaskinen (the pop machine).

Using MIDI keyboards, buttons, and knobs, the Popmaskinen translates digital outputs to physical instruments controlled by various electromechanical components. One of our favorite parts is the guitars, which use solenoids to strum, and even more solenoids to squeeze various cords on the pair of guitars.

END_OF_DOCUMENT_TOKEN_TO_BE_REPLACED 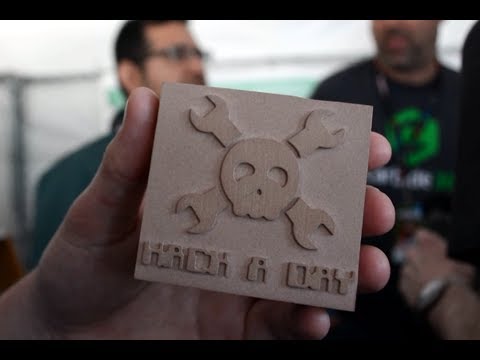 There were so many things to see at Maker Faire that the booths spilled out of the buildings and into various tents on the grounds. One of the most interesting tents was packed with tables showing off CNC machines and that’s where we ran into two that are familiar, and still amazing.

First up is the handheld CNC router which we saw all the way back in 2012. It’s a spectacular piece of tech that adds a base to a handheld router. The base gives the tool a touchscreen system, the ability to precisely track it’s location, and adjustment motors to move the cutting bit in order to correct for imperfections in operator movements. It’s really amazing and we are happy to see they have formed a company called Taktia around the concept and are heading for crowd funding soon.

The second half of the video shows off the Nomad CNC mill which we covered at the end of April. Carbide 3D had a hugely successful (more than 10x the goal) Kickstarter that they tried to blame on the support of Hackaday readers. It’s a no-brainer that this machine is the one to watch, as even our hacked camera work doesn’t lose the fact that it can produce rock-solid results. Drawing is difficult for a lot of people… So, why not build a robot to do it for you? [Darcy] had an idea for a rather unique drawing robot — he calls it the Isoscel-Ease.

Instead of using a boring XY gantry, a deltabot, or using a scissor linkage (actually that one is pretty cool!), [Darcy] decided to try harnessing of the power of triangle geometry! As you can probably guess, the linkage forms an isosceles triangle, hence the name. A pair of stepper motors increases and decreases the odd side of the triangle, allowing for a full range of continuous inky movement (there’s no pen actuator) over the page.

It’s a very cool little drawing robot, and it was completely designed in SketchUp — He has lots of photos of the build process and example drawings on his site — But don’t forget to stick around after the break to see a video of it in action!

END_OF_DOCUMENT_TOKEN_TO_BE_REPLACED

[Vishak] tipped us about the iFind Kickstarter campaign, a 1.25×1.06×0.09″ (32x27x2.4mm) tag meant to be attached to anything you may lose in your daily life. This device communicates with Bluetooth Low Energy (BLE) enabled smartphones, has a 200ft (60m) detection range and a loud alarm. What is interesting to mention is that this device doesn’t need any battery to operate as it

recycles electromagnetic energy and stores it in a unique power bank.

As you can guess, this particular claim intrigued the Hackaday team given that we never featured so small energy harvesting devices. The ‘closest’ thing that comes to our minds is the Allsee project, a simple gesture recognition device that uses existing wireless signals (TV and RFID transmissions) to extract any movement that occur in front of it. However the antenna was quite big and very little power was extracted.

A quick Google search let us know that Bluetooth Low Energy solutions usually consume an idle current of around 10uA @ ~3V. The (very) successful Sticknfind campaign which promoted the same battery-enabled product claimed a one year autonomy with a CR2016 battery and a 100ft range, leading to a ~90mAh/24/30.5/12 = 10.2uA idle current. As we’re not expert on the subject, we would like to ask our readers if they ever came across such energy harvesting performances (3V*10.2uA = 30uW) in a normal home environment. Our very bad maths indicate that if one would like to extract power from a typical Wifi router located 2 meters from you emitting 0.5Watts of power (in a perfect vacuum environment) with a 32*27mm = 864mm = 0.000864m² tag you’d only be able to get 0.5 * (0.000864/(4*pi*2*2)) = 8.6uW.

It is therefore too bad that we can’t see in the presentation video what is inside the iFind, nor more details about the patent pending technologies involved. We hope that our dear readers will enlighten us in the comments section below.

We stopped by the Atmel booth at Maker Faire to gawk at the pre-production Arduino Zero boards they were showing off. [Bob] gave us a rundown of everything the new board offers, and it’s better than we imagined when we heard about it last week.

I may be an odd egg in that I don’t like to use an IDE when developing uC firmware. Generally I rock the text editor and a makefile for 8-bit, adding OpenOCD and GDB when working with ARM. I probably shouldn’t be surprised that there is already OpenOCD support (and by extension GDB support) for the Arduino Zero. In fact, that’s how the Arduino IDE flashes the board. This should have been obvious since the board is really just a breakout for the SAM D21 chip which is already supported.

Riffing on the thought of this being a breakout board, we think they did a pretty good job. There are two USB connectors; one let you access the board as a device or a host while the other connects the debugging hardware. If you’ve never used an On Chip Debugger before it’ll change your life so do give it a try. When you do move past the initial prototyping phase of your project you can still use the Zero as a debugging tool. There’s an unpopulated 10-pin header (not sure if the small pitch header comes with it or not) which can be used to interface with a target board. [Bob] also spent some time talking about the configurable 6-pin header which allows you to choose from a range of hardware protocols (SPI, TWI, etc.).

Unfortunately we still don’t have info on the availability timeframe or pricing information. There was one hiccup with this pre-production run (two signals were swapped on the PCB) and they need to spin another board, populate, and QA before they can green-light the final product. 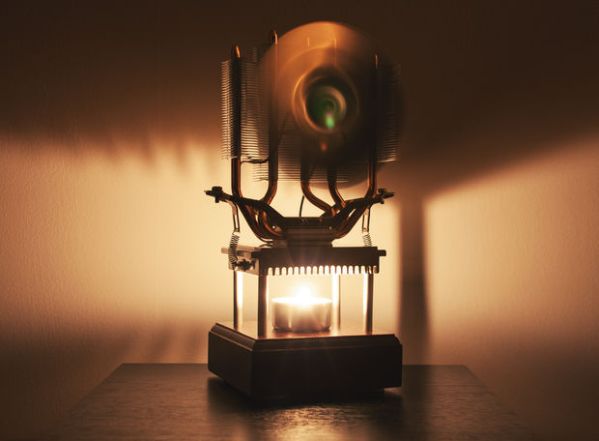 This is a great example of using a thermoelectric generator for a project. [Joohansson] made both a functional, and aesthetically beautiful fan using components from a computer.

Thermoelectric generators (TEGs for high temperatures, and cheaper TECs for lower temperatures) are also called peltier elements, which look like small square pieces of ceramic with two wires sticking out of them. If you supply power to it, one side will become hot, and the other cold. The TECs [Joohansson] is using want a temperature difference of 68C between either sides. They are typically used for cooling electronics and even some of those cheap mini-fridges will make use of one with a giant heat sink on the hot side.

In addition, they can be used as an electric generator, thanks to the seebeck effect. If you can create a temperature differential between the two sides, you can generate electricity. Using a CPU heatsink, cooler, and fan, [Joohansson] was able to power a small DC fan using only a candle. It’s a brilliant demonstration of the seebeck effect.