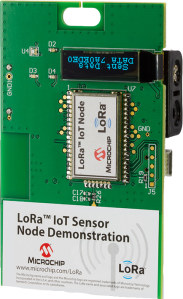 The LoRa uses a bit of frequency somewhere below 1GHz to communicate with a base station. This base station serves as a bridge for these chips and devices to the Internet. You don’t have the range of WiFi or Bluetooth, either: For the duration of Electronica, the entire eastern half of Munich was covered by exactly six base stations. One base station handled the city center.

This isn’t a first of its kind device – a few folks in Cambridge are working on Weightless, a similar small & cheap radio with terrible bandwidth that communicates with base stations. Weightless is the only protocol so far that isn’t proprietary, but TI, Sigfox, Semtech, and a whole lot of other companies are pouring money into devices like this. This is a huge market, and you simply would not believe the amount of time, engineering, and money that is going into these systems.

Here’s a link to the devices in Munich that are still around a base station. My device is 1A 37 64. Find me.

81 thoughts on “The Future Of The Internet Of Things”