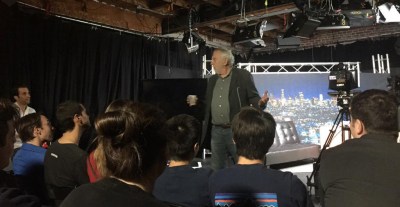 If you’d like to see more of this kind of programming we encourage you to check out the other Tomorrow Show videos and even subscribe to the YouTube Channel. And you can follow Gray on Hackaday.io.

Lastly, if you’re in the LA area, you should be part of the studio audience for the filming of future episodes. I got to mingle with other special guests like astrobiologist and Yuri’s Night founder [Loretta Whitesides],  [Jens Windau] from AIO Robotics and 3D printing pioneer [Janne Kyttanen], plus [Ed Mason] from GameFaceLabs let us try their ultra-low latency VR headset. There were even a few Hackaday.io members in the crowd, and the behind the scenes team was amazing too! It’s a fun night all round.  Thanks for having Hackaday on the Tomorrow Show!