[Daniel] and [Tobias] dabble in videography and while they would love a camera slider controlled by their favorite iDevice, commercial motorized camera sliders are expensive, and there’s no great open source alternative out there. They decided to build one for themselves that can be controlled either from a PS3 controller or from its own iPad app with the help of an ESP8266 WiFi module. 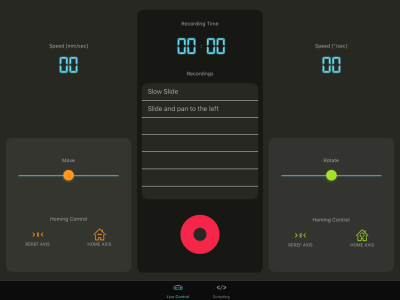 The camera slider is a two-axis ordeal, with one axis sliding the camera along two solid rails, and the other panning the camera. The circuit board was milled by the guys and includes an ATMega328 controlling two Pololu stepper drivers. An ESP8266 is thrown into the mix, and is easily implemented on the device; it’s just an MAX232 chip listening to the Tx and Rx lines of the WiFi module and translating that to something the ATMega can understand.

By far the most impressive part of this project is the iPad app. This app can be controlled ‘live’ and the movements can be recorded for later playback. Alternatively, the app has a simple scripting function that performs various actions such as movement and rotation over time. The second mode is great for time lapse shots. Because this camera slider uses websockets for the connection, the guys should also be able to write a web client for the slider, just in case they wanted the ultimate webcam.

You can check out [Daniel] and [Tobias]’ demo reel for their camera slider below.