In the previous installment, we talked about why flip flops are such an important part of digital design. We also looked at some latch circuits. This time, I want to look at some actual flip flops–that is circuit elements that hold their state based on some clock signal.

Just like last time, I want to look at sequential building blocks in three different ways: at the abstraction level, at the gate level, and then using Verilog and two online tools that you can also use to simulate the circuits. Remember the SR latch? It takes two inputs, one to set the Q output and the other to reset it. This unassuming building block is at the heart of many other logic circuits. 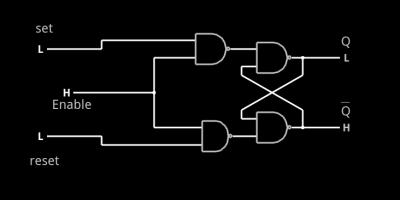 A common enhancement to the SR latch is to include an enable signal. This precludes the output from changing when the enable signal is not asserted. The implementation is simple. You only need to put an additional gate on each input so that the output of the gate can’t assert unless the other input (the enable) is asserted. The schematic appears on the right.

In the case of this simulation (or the Verilog equivalent), the SR inputs become active high because of the inversion in the input NAND gates. If the enable input is low, nothing will change. If it is high, then asserted inputs on the S or R inputs will cause the latch to set or reset. Don’t set both high at the same time when the enable is high (or, go ahead–it is a simulation, so you can’t burn anything up).(Note: If you can’t see the entire circuit or you see nothing in the circuit simulator, try selecting Edit | Centre Circuit from the main menu.)

The SR latch could be useful, but in many applications it is inconvenient to have to expressly set and reset it. I said last time, these circuits were like a memory bit, so how could you make the latch just remember the state of a single bit? It’s easy. Just drive the S input with a bit and the R input with the inverse of the same bit. The diagram to the right is in falstad or using Verilog.

There are other ways to get the same effect. Because latches and flip flops are so universal, there are a variety of designs. For example, look up Earle latch, which offers a fixed propagation delay compared to the traditional latch design.

The SR latch modified with the inverter is often called a D latch because the single input is data for the latch to store. To make it a D flip flop, though, you need to arrange to capture the data at a clock edge, not just any time the latch is enabled. 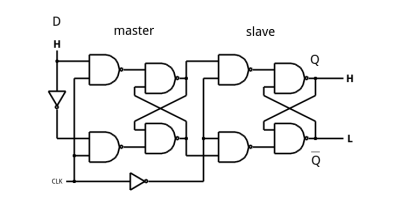 It is more common, however, to make flip flops sensitive to the actual clock edge. One simple way to do that would be to use the pulse edge detector I mentioned earlier to feed the enable output of a conventional latch. The simulator also shows a different method using a few latches, one of which is built with a three-input gate.

In this case, the reset is synchronous because it only happens when the flip flop is processing a clock edge. One of the EDA Playground examples shows a D flip flop with an asynchronous reset you can experiment with.

A T (or toggle) flip flop changes state on each clock pulse (at least, on each enabled clock pulse). This is simple to accomplish if you have a D flip flop. Just connect the inverted Q output to the D input (see left) and you are done. Notice this has the effect of dividing the clock frequency by two, and that’s one thing you frequently use flip flops for: frequency division.

In Verilog, the T flip flop is very simple (although you could, I suppose, wire up a D flip flop, it isn’t necessary):

There are many other ways to build a T flip flop, including by wiring the J and K inputs of a JK flip flop together (see below). 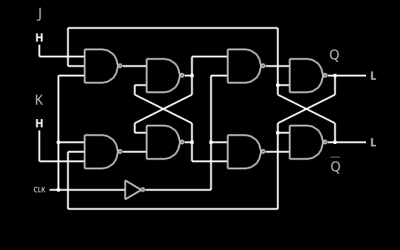 You can find a simulation of the JK flip flop and experiment with it (see image to the left). Note the simulator has a metastability problem (see below) loading the JK flip flop from a link. If the Q output oscillates, go to the Circuits menu and under Sequential Logic, select Flip Flops, and then JK Flip Flop.

In Verilog, you usually don’t model this directly, although you certainly can. Here’s a Verilog JK flip flop:

A Little More About FPGAs

Much of the time you don’t directly write flip flops by themselves when coding for an FPGA. First, most FPGA vendors supply optimized flip flop macros that you can use that take advantage of on chip resources. In addition, you’ll usually code at a higher level and the synthesizer will infer the flip flops you want.
For example, you might write a simple state machine:

Even though that doesn’t look exactly like one of the examples, the FPGA synthesizer will recognize this and build the corresponding circuit using flip flops. It also recognizes other flip flop-based circuits like counters and shift registers.

That’s not to say you shouldn’t know the flip flop types and know how to code them. Being able to do so will help you understand what the tools are inferring for you. However, if you look through a lot of practical code, you won’t see many exact copies of these flip flop instantiations.

What you will see, though, is clock sensitive always blocks with assignments in them. You’ll also see higher level constructs like counters and state machines that use these building blocks internally.

In the first part of this series, I talked about how our neat schematics don’t match the real world and while that is sometimes a problem, it is also sometimes a good thing. Flip flops are no exception. Because of real world circuit elements, flip flops have several issues: setup time, hold time, and–more generally–metastability. 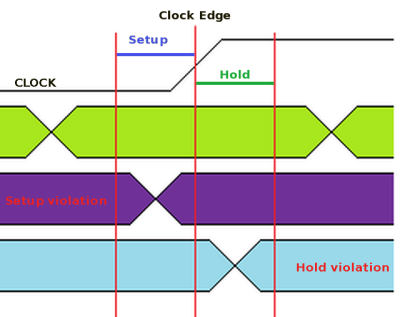 You can see a graphical representation of setup and hold time to the left. Inputs to the flip flop must be stable for the setup time before the active clock edge. The inputs also have to stay stable for at least the hold time after the clock edge. Graphically, then, the signal can’t change between the outer red lines. The green signal is legal, but the other two violate the rules. In practice, this limits how fast the clock can be. Suppose your click has an active edge every 10ns. If your combinatorial logic feeding the flip flop has a 9ns delay, that should be ok, right? Not if the minimum setup time is more than 1nS. Setup and hold violations are sometimes difficult to troubleshoot, although modern scopes sometimes have special trigger modes to find violations.

If you violate the setup or hold times, the flip flop may go metastable. What this means is the flip flop may behave badly. In some cases it will oscillate or it may take longer to change states than normal. There are several cases where you have to worry about metastability. One is when you are changing clock domains (that is, feeding a flip flop from another flip flop that uses a different clock). Another problem is when you have data coming from a purely asynchronous domain such as a user input switch or an RS232 port. In that case, there’s no way to be sure the input won’t change within the setup or hold time (or even right on the clock edge).

When you have an asynchronous input you’ll usually cascade it through multiple D flip flops. Each additional flip flop you use reduces the chance of metastability (at the output). However, it also delays the input by a clock cycle for each flip flop.

Metastability is a big topic and probably deserves a whole post in its own right. If you can’t wait for that, there’s a good IEEE paper on the subject or have a look at the video below.

There are metastability resistant flip flop designs that have a reduced chance of going into the metastable state. These aren’t perfect, though, because you can’t make both the setup and hold times zero. In the end, there’s no substitute for good design.

Flip flops are a powerful tool for a digital designer’s arsenal. Implementing them can range from a 555 chip (no kidding, you can make a slow flip flop with a 555) to using discrete components, to using ICs to writing Verilog or VHDL. Learning about flip flops is a lot like learning about chess. You can learn the moves in a few minutes. You can spend a lifetime trying to master them. I hope these two posts have taught you the moves. The rest is up to you.