We’ve been keeping tabs on the progress SpaceX has made toward landing a rocket so that it can be reused for future orbital launches. As you would imagine, this is incredibly difficult despite having some of the world’s greatest minds working on the task. To become one of those minds you have to start somewhere. It turns out, high school students can also build guided rockets, as [ArsenioDev] demonstrates in his project on hackaday.io. 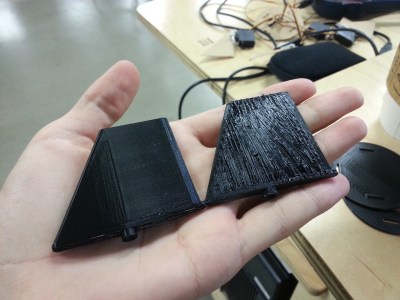 [Arsenio]’s design targets amateur rockets with a fuselage diameter of four inches or so. The main control module is just a cylinder with four servos mounted along the perimeter and some fancy 3D printed fins bolted onto the servo. These are controlled by an Arduino and a 6DOF IMU that’s able to keep the rocket pointing straight up. Staaaay on target.

We saw this project back at the Hackaday DC meetup a month ago, and [Arsenio] was kind enough to give a short lightning talk to the hundred or so people who turned up. You can catch a video of that below, along with one of the videos of his build.