The point of the reel is that it will go through a pick-and-place machine, which is a machine that uses a vacuum syringe to pick up the part and place it in the right spot, then advance the reel and repeat. In theory this is straightforward. In practice, there are a billion little details that make a huge difference in reliability. Things like the tension of the clear strip, which must be just right so that it doesn’t leave slack but doesn’t pull the reel out. Or the adhesiveness of the strip can be a problem, too. We had one reel that started off jumpy; the adhesive was too strong, so the tape tensioner struggled to pull the tap off the reel, and it would do it in such a manner that the newly exposed component would twitch and sometimes jump out of the reel, leading the vacuum to try to pick up a missing part and stall. After a while the humidity made the tape adhesive looser and the problem went away. Every day running the line can be different for each reel, so keeping everything tuned is a constant battle. Most of the time the reels will come in sealed packages because humidity has a huge effect on the reels and the components in them (especially their connections).

Some components come in tubes because they are inconvenient for reels. This is surprisingly not a problem, as many pick-and-place machines have attachments that hold the tube at an angle and have mechanical shakers that make the parts slide out one at a time. But we’ll ignore that for now.

So you have a box of reels and cut tape (the term used for a cut strip off of a reel, if you don’t order the full reel), and you have a PCB with solder paste on it, slowly warming up. How do you get the components onto the PCB?

In small volumes, usually with good old tweezers. You do not want to use the ones in the bathroom vanity, as solder paste usually has lead in it and you don’t want to make anyone angry or poisoned. Get a nice set of very fine tipped tweezers.

It turns out it’s possible to go with tweezers for medium volumes as well. In the first year of production, 3,000 units of a product that I developed were assembled by hand, each with roughly five SMT components. It turned out that at that volume, hiring high school kids at slightly higher than the local burger joint rate gave us lots of manufacturing flexibility, and gave the kids a decent wage at whatever hours they wanted, in a relevant field to their interests, and ended up being cheaper than the quotes we got from China.

The good news is that manual placement can get away with being pretty sloppy. When the PCB goes through the process of reflow, there are some neat chemical and mechanical processes that take place that align everything just right, so that the exact placement of the components isn’t critical. Essentially, the solder will melt and flow onto the pads and off of the solder mask, and any component will float on this and the flux and self-align. Still, all the connections of a component must be touching the solder paste, or else they won’t align properly. 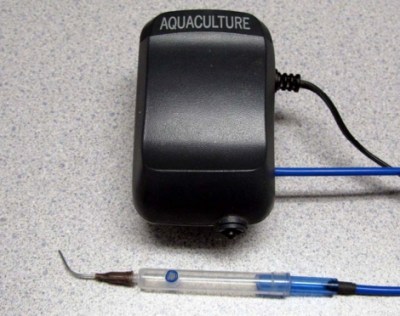 When you are doing a bunch of boards that have a lot of components, it can quickly get tiring to place all the components by hand. One method of making it easier is the vacuum tip instead of tweezers. The idea here is to get an aquarium pump and set its direction so it is sucking. Then put a syringe on the end of a tube and put a small hole where the thumb will be. Now when you put the finger over the hole, the syringe needle will suck up a part. Move the part to your destination and release your thumb and the vacuum seal will be broken, releasing the part onto the PCB. This is good for pulling the part directly out of the tape where tweezers can’t reach. We’ve covered a few of these aquarium pump pick-and-place builds over the years. 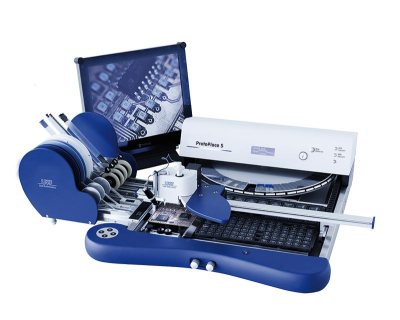 The next step is a strange hybrid between man and machine. It’s a contraption that holds the PCB in place and has a hand rest that moves on linear rail in the X and Y directions, and sometimes has a vacuum needle as well, and trays for reels or loose components. It doesn’t have any brains; those are provided by the operator. The operator can rest their hand on the moving pad as they direct it to go pick up a part, then move to place it. It just alleviates the physical burden on the person doing the component placement, but doesn’t really save much time. It’s hard to think of a good use case for this level of machine, though. Maybe a shop where they have to assemble small batches of different boards? Definitely not for high volume production of one board.

Unless your budget is in the $3,000+ range, you may never get to use one of these. This is a device with an automated gantry and a vacuum needle as well as a tray of reels. It reads a special file which details which components are on which reel, and which XY and rotation coordinates to place them. There are a lot of features to look out for. First is CPH, which is how many components it can place in an hour. Usually you’ll see numbers in the thousands, with the more expensive ones getting into the tens of thousands. They accomplish this with multiple nozzles, so the head will move over to the reels and pick up more than one component, then move over to the board and place a few components at a time.

Another important number is how many reels the machine can support. If you are developing a product that requires 30 unique components but the pick-and-place can only do 25, then you’re looking at either needing two machines, or doing a few runs of boards with 25, then changing out the reels and putting those boards through again for the other 5 reels, then hopefully getting them through the oven intact. It’s much better to design your board to use as few unique components as possible (if you have a 10k resistor elsewhere, do you REALLY need the 4.7k, or can you get away with a 10k there instead?), or make sure you get a pick-and-place that can handle the number of reels needed. On the big fancy assembly lines, each machine has a hole in either side with conveyors, so that a PCB goes in one machine on the left, processed, then out on the right. This allows for a completely automated line, and the possibility of having two pick-and-place machines stacked together so the number of reels is not a limitation.

Some have machine vision, too. That allows the machine to automatically correct for slight deviations either in the PCB (if there is any slop in the alignment holes) or in the picking of the part (sometimes if a heavy part is rotated 270 degrees, the momentum of the rotation will cause it to over rotate, or the movement of the head will cause the part to shift slightly). This is especially good for BGA or fine pitch components, where perfect placement is crucial.

There is a company called VisionBot making a pick-and-place and launching soon on Kickstarter. They may be worth watching.

This has been attempted, but there are so many challenges in these machines, and such small demand from the community, that progress is slow. OpenPnP is the community around this. There’s also a fine Hackaday.io project building a DIY pick-and-place, and another one was a semifinalist in the 2015 Hackaday Prize that converted a CNC gantry.

The idea here was to use the same technology that has been used with 3D printers to pick up and place components on the PCB. A camera is used to identify where the cut tape is and where the PCB is, and a process aligns the cut tape with the appropriate component designation, and then the machine is off on its own using the computer vision to identify where it needs to pick up and place each component. This is particularly suited for one-off or really low numbers of boards. They can’t advance reels, and everything must fit within the reach of the head, so board size is limited and number of components is limited. FirePick Delta is one such example.

Placing components should not be a thing that prevents you from diving into SMT PCBs. Tweezers are perfectly fine for 0402 components even for novices, but there are also machines to aid in placement from the cheap-and-rough up to the high volume super fancy mass production, and some options in between for small and medium volumes of startup-type basement production.

34 thoughts on “Tools Of The Trade – Component Placing”