END_OF_DOCUMENT_TOKEN_TO_BE_REPLACED

When your widgets have proven so successful that building them gets to be a grind, it might be time to consider a little mechanical help in the form of a pick and place machine (PnP). If you’re going to roll your own though, there’s a lot to think about, not the least of which is how to feed your beast with parts.

Managing the appetite of a PnP is the idea behind this custom modular parts feeder, but the interesting part of [Hans Jørgen Grimstad]’s work-in-progress project has more to do with the design process. The feeders are to support a custom PnP being built in parallel, and so the needs of one dictate the specs of the other. Chief among the specs are the usual big three: cheap, fast, and reliable. But size is an issue too insofar that the PnP could be working with dozens of component reels at once. Flexibility was another design criteria, so that reels of varied width can be accommodated.

With all that in mind, [Hans] and company came up with a pretty slick design. The frame of the feeder is made out of the PCBs that house the motors for handling the tape, and the ATmega168 that controls everything. Tapes are driven by a laser-cut sprocket driven by 3D-printed worm gears. The boards have fingers that mate up to the aluminum extrusion that the PnP will be built from, and at only a few millimeters wider than the tape, lots of feeders can be nestled together. The video below shows the feeder undergoing some tests.

Alas, this build isn’t quite done, so you’ll have to check back for the final schematics and PCB files if you want to build one for yourself. While you’re waiting, you might want to build your own pick and place.

END_OF_DOCUMENT_TOKEN_TO_BE_REPLACED

[Dr. Cockroach]’s goal was to build a four-bit computer out of recycled and repurposed junk. The resulting computer, called IO, consists of a single 555, around 230 PNP and NPN transistors, 230 diodes, and 460 resistors. It employs RISC architecture and operates at a speed of around 3 Hz.

He built IO out of cardboard for a good reason: he didn’t have a big budget for the project and he could get the material for free from his workplace. And because it was built so cheaply, he could also build it really big, allowing him to be able to really see each circuit close up and repair it if it wasn’t working right. You can really see the architecture very well when it’s this big—no tangle of wires for [Dr. Cockroach]. He uses over sixty blue LEDs to help monitor the system, and it doesn’t hurt that they look cool too. One of our favorite parts of the project is how he used copper fasteners to both manage the cardboard and serve as wiring points.

END_OF_DOCUMENT_TOKEN_TO_BE_REPLACED

In the 80s and 90s, building a professional quality PCB was an expensive proposition. Even if you could afford a few panels of your latest board, putting components on it was another expensive process. Now, we have cheap PCBs, toaster-based solder ovens, and everything else to make cheap finished boards except for pick and place machines. ProtoVoltaics’ semifinalist entry for the Hackaday Prize is the answer to this problem. They’re taking a cheap, off-the-shelf CNC machine and turning it into a pick and place machine that would be a welcome addition to any hackerspace or well-equipped garage workshop.

Among the additions to the X-Carve is a new tool head that is able to suck parts out of a reel and spit them down on a blob of solder paste. The webcams are monitored by software which includes CUDA-accelerated computer vision.

Of course a pick and place machine isn’t that useful without feeders, and for that, ProtoVoltaics built their own open source feeders. Put all of these elements together, and you have a machine that’s capable of placing up to 1000 components per hour; more than enough for any small-scale production, and enough for some fairly large runs of real products.

You can check out some of the videos for the project below.

END_OF_DOCUMENT_TOKEN_TO_BE_REPLACED 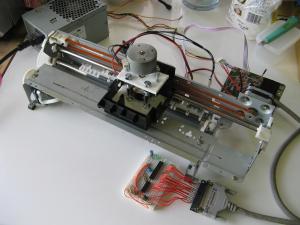