There are a number of problems typical with a surface mount reflow process:

In the picture above are examples of tombstoning (C4), billboarding (R6), bridging (IC1), spattering (all over), solder balls (bottom right), and insufficient fill (IC2).

So how do we detect and correct these problems?

In the lowest volumes, usually by the person who did the assembly, the best way is to use your plain old eyeballs. A single glance isn’t nearly enough, though. It’s important to methodically look at and consciously think about each connection and whether it is good or not. Lots of good light makes the job easier, too. 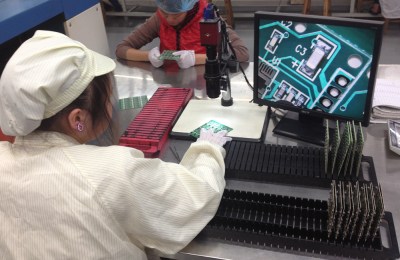 It can be straining on the eyes to look closely at every joint, and depending on available lighting conditions and the size of the components used, it may not even be possible. Sometimes it’s necessary to bring in a microscope. You can start with a loupe, a simple handheld lens usually used by jewelers, or the magnifying glass on your helping hands. These can have built in lights as well. Then there are USB microscopes that let you see the zoomed image on a big screen. Others are purely optical and make you stuff your face up close to the eyepiece.

Move two probes to specific locations and measure the resistance or capacitance, and do this repeatedly, and you have a decent way of verifying the circuit. There are two variations on this. In-circuit tests use a test jig with a whole bunch of pogo pins (called “bed of nails”). The jig is pressed down onto the PCB, measurements are made from each of the pins, and it’s done. The downside to this method is the need for a new fixture when changing designs, but the upside is super-fast testing and the ability to do other operations, including programming.

The other variation is flying-probe testing, in which the machines have a few probes on a gantry that can fly around a board at dizzying speed. There is no fixture required, so setting up this testing process is much quicker and more robust, but because the process is serial instead of parallel like the ICT method, it can take longer to test each PCB, making it more expensive (plus the machines are fancy and expensive).

How do you know if your BGA chip was assembled properly? Zap it with some X-rays and look inside! Granted, this is not a method that’s easily available to the hobbyist, at least not without calling in a few favors, but it’s the only non-destructive way to inspect a PCB.

The other way is to slice through very carefully with a saw to take a peek. Of course, this is destructive, so it’s only good for diagnostics on the process and not the individual boards.

I have to mention this one because I successfully implemented a cheap AOI for production. The idea is to use a cheap webcam and OpenCV to identify faults. AOI stands for Automated Optical Inspection, and is very common for testing circuit boards. This cheap AOI is the same idea, but with a lot of limitations. Essentially, you start with a fixture that holds the PCB in place, and a webcam positioned above it so that the PCB takes up the entirety of the camera’s view. You put a few “golden” boards in and train OpenCV with templates of what the connections should look like. Then you mask out everything that’s not a component, and start running boards. A connection that matches the template will mask out on the screen, and one that doesn’t will be visible and zoomed in, making inspection easier for the operator. This method identifies bridges, tombstones, missing parts, and billboards, but there are other types of errors it can’t catch, and it’s also limited to small PCBs, with frequent false positives. Still, this method can be super cheap for what it is, so it’s good for a run of a few hundred to thousands.

The camera or PCB will be on a gantry so that the camera can focus on different parts of the board, and the AOI is trained to look for lots of different kinds of faults. They still have a lot of false positives, so it’s important to have an experienced operator that can verify the faults. This slows down the process and increases the cost, but on some boards, this is a necessary step for each board.

There’s another option, and it’s the equivalent of “let’s plug it in and see if it blows up.” While a little dramatic, this is a legitimate testing solution, provided you have adequate protection on the test equipment. If it powers on, that’s a decent first step. If it can be programmed, that indicates that a lot of other hardware is running. If your firmware is clever enough, it can perform a power-on self test and read voltage levels on specific ADC pins, verify expected GPIO values, or if hooked up to USB or some other communication, report out whether it works or not. I had a project that went through a microphone calibration step, which not only verified that the microphone circuit was working, but also checked that the other sensors and LEDs were working through a series of self tests accomplished automatically in a small box, and reported over USB along with the MAC address of the device. The hardware couldn’t leave the building unless it passed every test.

In the end, most of these testing methods will be used for a product. In the prototyping stage, it will be visual and microscope inspection. Then flying-probe or AOI as volumes increase, with ICT coming in after the design is solidified and volumes are higher. There will be the occasional X-ray or sawing to verify that the production line is still running properly. And functional testing will almost certainly be a last stop on any production line.

15 thoughts on “Tools Of The Trade – Inspection”