The mold is where all the exciting action happens, and we’ll focus on that. Most molds are made out of either aluminum or steel. Aluminum is great because it allows for cheap tooling that can be made quickly, but it has the downside of only lasting for 5-50 thousand shots (a shot is the term for one cycle of the mold to generate a part). Steel is used on most molds, and lasts for hundreds of thousands of shots.

Sometimes you can have a family mold, where you shoot multiple parts into the same mold. For example, you might have an enclosure that has a front piece, back piece, and cover, all made out of the same material. It’s better to have all three in the same mold not only to reduce mold costs but also to reduce the amount of time to make the parts (three parts in each cycle). Other times you may have a small part but need LOTS of them, like a bottle cap. For these you want multiple cavities, where instead of shooting a single cap at a time and incurring the time of waiting for each cycle for a single cap, you have lots of identical cavities and now you get lots of parts in the same cycle time.

For the really really big volumes, there are 3D molds that can produce enormous quantities of complicated parts. You will likely never be able to afford a mold like this one:

When sourcing a mold from China, there is a huge difference in price on one simple question: domestic or export. A lot of US based injection molding companies will outsource their mold making to China, have the mold shipped to the US, and then run the parts in the US. These molds are made for export and usually have higher quality steel, better cooling lines, and better consistency across multiple cavities. A mold made for import usually stays in house and the Chinese company produces your parts for you and ships them to you. They can afford to take a hit on the cost of the mold because they are making up for it in the cost of the parts.

There are a few features present in molds. Cooling lines aren’t in all of them, but they serve a useful function. As the mold is used over and over, it heats up and would eventually reach the temperature of the melted plastic. Naturally, when you open the mold only melted plastic would drip out. It’s important to keep the mold hot enough that the plastic will flow to all parts of the mold cavity before cooling, but cool enough that it will harden in a reasonable amount of time to keep the cycle time low.

The nozzle is where the screw pushes the plastic in, and then the plastic travels through the sprue until it reaches the runners, which route the plastic to the openings of each of the cavities, called gates. If you’ve ever built a model airplane, you know what the runners and sprue are; they’re the round channels that hold the plastic pieces together. Also worth noting is the parting line, which is the line around the part where the two halves of the mold come together.

Most molds are simple in that they only require two parts that come together and apart. They are way cheaper and last longer. But sometimes it’s necessary to have features that require undercuts or side holes or things that are just not possible with a simple mold. There are still lots of creative solutions to avoid this, and workarounds that get you close, but in general you should aim for a straight mold. When that’s not possible, though, you have sliders and lifters, which are parts of a mold that come in from a side, and significantly increase the cost and complexity of a part. That’s why you’ll often see side holes off the parting line; it’s a way to create a hole without needing a slider because it’s just two halves of a hole put together at assembly time.

Generally you can look at a part that has been injection molded and identify some very consistent features (it’s a process that has been around for decades, so some rules of thumb have been developed). First, you’ll find the parting line. If you see a snap feature, you can look for a second parting line where a slide comes in. Next you’ll find the ejector pin marks on the inside of the part, usually in the sturdiest parts of the piece. Then you’ll find the gate, which is where the plastic enters the cavity.

On sloppy molds that have been run for a long time, you’ll see something called flash. This is where the metal has worn down, usually at the parting line or the ejector pins, and thin slivers of plastic are formed in that empty space. Sometimes it’s cheaper to just employ someone with a knife to cut off the flash, but usually it’s an indication that it’s time for a new mold. You’ll also see ribs, which add strength to the part without adding lots of bulk. And you’ll see that the whole part has a consistent wall thickness. 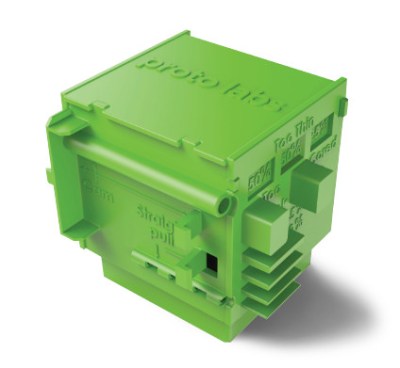 Bosses (for holding screws) should be offset from the walls to prevent the walls from being too thick there. When you have thick sections, they tend to shrink when they cool, leading to a thing called a sink mark. You’ll see them on poorly designed parts. If you want to physically touch these things, check out the Protomold Design Cube (or check out their extensive resources for designing parts to be injection molded).

Injection molding is not cheap, and is not great if you only want a few of something. Generally, a factory will charge a fee every time you want to do a run of parts because they have to pay for the significant amount of time it takes to insert your mold into the machine, run parts until the mold is the right temperature, and get all the plastic from the previous job out and the colored plastic for your job in the screw.

If you’re looking for prototype quantities, like one to a couple hundred, there’s another option called casting, in which a positive is machined, then a silicon mold is created around that positive, and then a resin is poured into the mold (often under vacuum to fill all the voids and get the air bubbles out). This results in a part that is similar to what would be made with injection molding, but with a cheaper mold that’s good for only a few to a few hundred shots depending on the mold material and part complexity. We’ll cover casting later.

There is also research and development going into 3D printed molds. These are still very new and the quality fairly low, with the number of shots possible still extremely limited, but it’s promising. A third option, especially for small parts, is the drill or arbor press method, in which you make your own mold using a CNC out of aluminum, then heat up pellets and use the arbor press or drill press to force it into the cavity. One group even created a Kickstarter around the arbor press injection mold and managed to deliver, and someone else used a 3D printer to extrude plastic directly into a mold.

Injection molded parts are everywhere, and there are a lot of resources for learning how to design parts. A lot of things can be done very cheaply in high volume assuming you design your part specifically to be injection molded. In low volume, though, this is not the tool you are looking for.

33 thoughts on “Tools Of The Trade — Injection Molding”