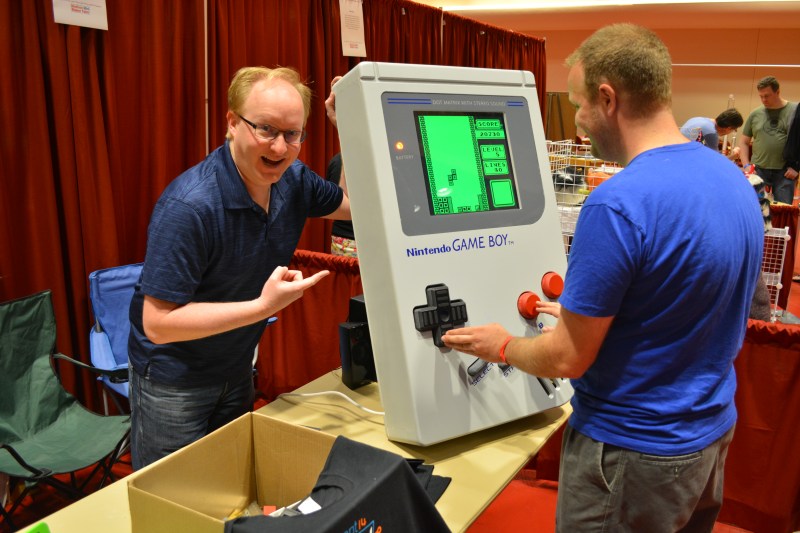 Plans for a coffee table version

Teddy poses with his arcade controller

Speaking of games, check out what Teddy hacked together in under a week. It’s a 2-player table-top arcade controller. After laying out the buttons and joysticks he soldered them to an iPac controller which makes it really simple to get the user movements in the Raspberry Pi running RetroPie. He has plans to expand on the work, and showed me his preliminary plans for a version built into a coffee table!

Sculpture held upside down shows how it’s made

I’ve heard of the Bodgery, a hackerspace in town, but haven’t had time to visit yet. It was nice to meet some of the members who were exhibiting cool builds from the space. For me the most interesting was a piece of art made from aluminum reclaimed from Miller High Life cans. You pour the melted aluminum over Water Balz (a polymer that absorbs water). When cooled just remove everything that’s not aluminum and turn it over. I also enjoyed the intricate laser-cut plywood boxes. 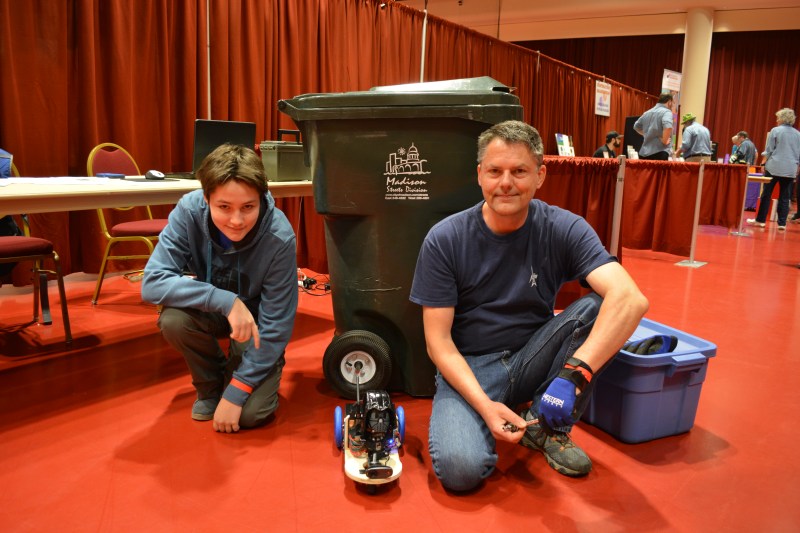 I was attracted to this booth by the little robot you see between Dad and Son. It has an oversized head Darth Vader (Dark Helmet anyone?) which is a marine battery with a Raspberry Pi, webcam, and two motors. A WiFi dongle and clever webpage code puts the robot on your cellphone to be driven at your every whim.

But the main show is actually the green recycling container behind them. The wheel you see is a replacement for stock and driven by a gear-motor and chain linkage. It’s a line following robot. On garbage/recycling night you push a button and the container drags itself out to the curb, following the line of electrical tape down your driveway. That’s an IoT I can get behind (but if you really want to win my heart you have to produce a laundry robot). They’ve published a video of the recycle bin performing the same feats as the PiBot, but we hope the team will hit up our tips line when they start demoing the semi-autonomous version!

Ankle and Wrist straps plus the base station

They had great signage!

Rounding out the highlights of the Madison Mini Maker Faire is Music-in-Motion. The unassuming booth showed one of my favorite tech hacks: user enhanced music. This has occupied a warm place in my soul since the video game SSX Tricky where the audio tracks get better as you pull off more snowboarding moves.

There’s no snowboarding here, but you do pull off some sweet moves. Start by strapping a Velcro band to each wrist and ankle, then start moving to the beat. Each band has an Arduino  Pro Mini with an ADXL335 accelerometer and a nRF24L01+ wireless module. They communicate back to a base station (nestled in a LEGO wonderland) and are fed to a computer. The music is driven by Pure Data which [Calvin] used to create a synthesizer and drum looper that gets more awesome as you pull off awesome moves. It’s the Nintendo Power Pad of our time and it’s… you guessed it… awesome.

I had a great time at the Madison Mini Maker Faire and can’t wait to get to BAMF this coming weekend. Especially the… err.. awesome party we throw every year.