Paul Stoffregen has built a new Teensy. The latest in the line of very powerful, USB-capable microcontrollers is the Teensy 3.5 and 3.6 development boards. It’s faster, more capable, and bigger putting even more pins on a solderless breadboard.

The first Teensy was one of the first Arduino compatible boards with native USB. The Teensy 2.0 was even better with support for USB keyboards, mice, and MIDI. Even today, the Teensy 2.0 is the de facto board to use if you want to build anything like a USB keyboard. The Teensy 2.0 was followed by the exceptionally powerful Teensy 3.0, the first 32-bit Arduino compatible board, and thanks to Paul’s contributions of a pile of Arduino libraries, doing cool stuff faster has never been easier. Since the launch of the Teensy 3.0, its successors, the 3.1 and 3.2 have launched. If you want the power of an ARM microcontroller with the deepest Arduino library support, there’s only one board you should consider.

The high-end offering in the new line of Teensys is the Teensy 3.6. The main CPU is the Freescale/NXP Kinetis K66 ARM Cortex-M4 running at 180 MHz. There’s 1 Megabyte of Flash on board, 256K of RAM, and 4K of EEPROM in this chip, 32 DMA channels, two CAN bus ports, and a USB High Speed (480 Mbit/sec) port.

Like the Teensy 3.0, 3.1, and 3.2 before it, the 3.5 and 3.6 are loaded up with IO. pins. There are 62 IO pins available as 0.1″ headers and as SMD pads on the back, and they’re all entirely compatible with the Teensy 3.2. That means the Teensy Audio Adapter board and the Prop Shield will still work with these latest Teensys.

Of course the Teensy is just a microcontroller board, and you need libraries to build anything with it. In the massive thread over on the PJRC forums, a community of Teensy hackers have been putting together device libraries for the past few months. The FAT file system works on the SD card, you can have six serial ports, and Paul has been hard at work getting the crypto accelerator library working. 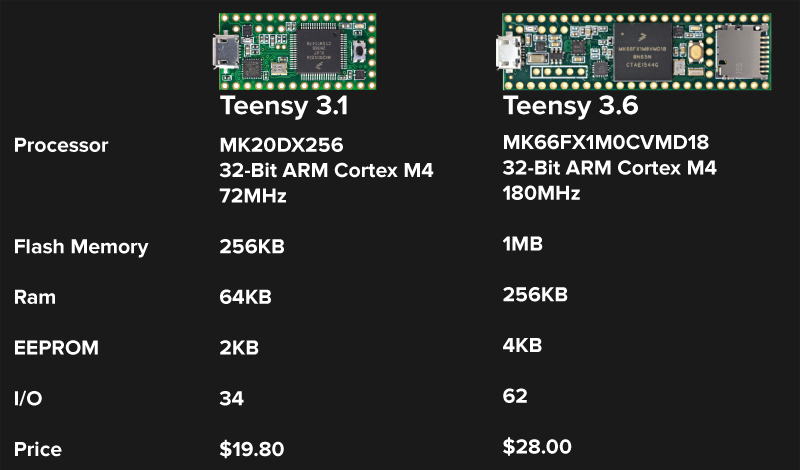 This thing is fast, and I have no idea what to use it for

There are faster microcontrollers around. The STM32F7, an ARM Cortex M7 running at 216MHz was released last year, but so far we’ve only seen a single development board and only a few projects using this powerful microcontroller. The current state-of-what’s-on-the-workbench is still firmly planted in the ARM Cortex M4, and we’ve seen some very impressive projects from video generation to quadcopter control boards with these chips.

The Teensy 3.5 and 3.6 are a bit more powerful than what you would find currently available — the chip has only been available for a few months. With this comes a lot of possibilities, and I don’t even know what it could be used for. A cursory glance at the datasheet tells me it’s possible to connect SDRAM to this chip somehow. I haven’t looked into that enough to see if it’s even possible with the Teensy 3.6. If it is, though, we’re going to see some very impressive builds generating video for LED walls, or real-time synthesis on audio waveforms stored on an SD card.

There’s a lot you can do with this Teensy, and we can’t wait to see what the community comes up with. Paul has hit this one out of the park, and for once you might be limited by your imagination and not what a microcontroller can do.