Everybody loves plasma globes, but if you are like [zrgzhv], building them as large as possible is the challenge! Definitely a beautiful project, at 7 feet long and 1 foot in diameter, this monster tube makes an impressive display of plasma filaments that slowly move inside. Heck, they almost seem to be alive following the movements of his hand and it’s hard not to become mesmerized by the motion. 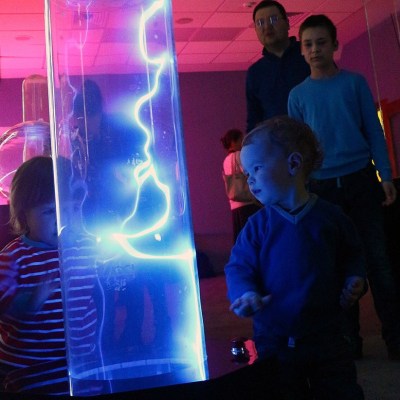 This tube follows the same principle of operation as its smaller cousin, the plasma globe. Air is evacuated and the tube is filled with a mixture of noble gases, with the particular mixture being responsible for the color of the filaments. Then, high voltage AC is applied to an electrode, which causes the moving tendrils of colored light to extend from the electrode to the outer glass, a phenomenon known as glow discharge. In general, gas-filled tubes can have other uses such as lightning — in the form of fluorescent, neon and xenon lamps — or high power switching as in the thyratron tube, among other applications.

The tube has a weight of over 65 pounds, and needs 300 watts of power to operate from an also homemade power supply. In another video, you can see 10 tubes of different colors working at once. Plasma always makes a great attention-getter; another nice example of its use can be seen in this steampunk lamp which incorporates rotating contacts on the outside of the glass.