We tend to think of soldered joints as the king of electrical connections. Something about the act of heating up a joint and flowing molten solder into it lends a feeling of permanence and quality to the finished product. And soldering was basically the only show in town for the early days of the commercial electronics industry.

But soldered joints have their problems, both electromechanically and in terms of production – after all, an assembly worker can only sling solder around so fast. In the early 1950s, AMP Corporation came out with the first crimp connections for production use, the F-Crimp or open-barrel design. Using this crimping design, AMP sold a wide range of connectors that could be rapidly and repeatably applied to conductors, and that lent themselves to automated fabrication methods in a way that soldering would never be able to achieve.

Crimping takes advantage of the properties of metals to achieve electrically and mechanically sound connections. Metals used in crimp connectors, like copper, brass, aluminum, or bronze, are both ductile and malleable. A metal’s ductility is the degree to which it can deform under tension, while malleability is a measure of how metal deforms under compression. Crimping involves applying significant compressive forces onto the crimp connector and the wire, so the malleability of each element is an important factor in crimp quality. But ductility plays a role too as both connector and wire undergo significant stretching during the crimping process.

Crimp tooling is a critical part of a quality crimp. The business end of any crimping tool is the die set. This is generally a tool-steel anvil and hammer, the specific configuration of which is determined by the connector type.

For AMP-style F-crimps, the U-shaped connector is placed on the anvil with its legs up. A properly stripped wire is placed between the legs, and the hammer moves down onto the anvil. The hammer guides the legs of the connector over the strands of wire, eventually folding them back down into the gathered bundle of strands.

As more pressure is applied to the connection, metal in the wire strands begins to stretch and flow. This loosens and drives off any surface oxides that might have increased the resistance of the connection. With more pressure comes more deformation of the wire bundle until the formerly round cross-section of each strand is gone, replaced by a collection of strands with flattened sides snugged up next to each other in a honeycomb pattern. The result is cold-welded, gas-tight junctions between the strands and the crimp connector. 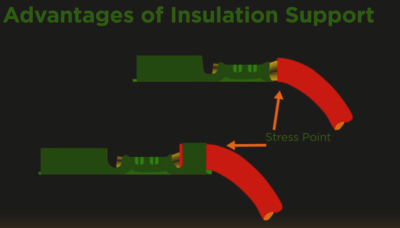 Most crimping tooling also takes care of strain relief by lightly crimping a second set of legs onto the plastic insulation of the wire. Care is generally taken not to pierce or otherwise mar the insulation; usually these strain relief crimps just wrap the insulation firmly and direct the force of bending into the insulation and away from the wire’s conductors. A third set of legs may also be formed into a circle by the tooling to permit the finished termination to be inserted into a plastic body.

A critical aspect of a crimp connection is the ability to inspect it and be sure that everything went according to plan. Cross-sectional photomicrographs of crimps are the gold-standard for inspection, but are destructive to the product. Luckily, one critical parameter can reveal everything about the crimp process and be measured non-destructively – the crimp height. This can be measured with a micrometer and reflects how much pressure was applied and whether the wire strands were properly compressed.

A properly executed crimp connection is electrically reliable and mechanically strong, and knowing what’s happening inside that tool is the first step in achieving consistent results. For a more in-depth hands-on tutorial on crimping, see our guide to proper crimping procedures.

123 thoughts on “Good In A Pinch: The Physics Of Crimped Connections”