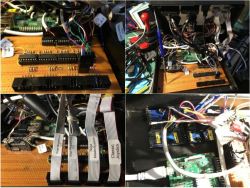 [jfrmilner] kept the controllers relevant to the games he would be playing, but we hope there’s some room to include a controller in rug format in his build. Of course, there’s always the option of Jerry-rigging old systems to use your preferred retro gamepad.

8 thoughts on “Why Only Use One Controller When You Can Use ALL Of Them?”