You’ve acquired your first 3D printer and are giddy with excitement. But like all new additive manufacturing adventurers, the more you do with your printer the more questions arise. Don’t worry, we’ve got your back.

Getting the most out of your time with a new 3D printer has a lot to do with the tools and accessories on hand and what you do with them. Let’s take a look at a few of the accessories that should accompany every 3D printer, be it in your home, school, or hackerspace. There’s already enough potential aggravation when it comes to 3D printing, the goal here is to ensure you won’t be without a tool or supply when you need it the most.

Previously we talked about what one should do after getting their own 3D printer to ensure, in so much as can be possible with this sort of thing, long term success. If you haven’t seen that article yet, make sure you add it to your reading list. The regular maintenance and calibration that is unique to 3D printing was covered, as was the need for the operator to personally hone their own skills.

OK, so obviously you need filament for your 3D printer. But which filament? Personally, I’d suggest you get a few different brands early on so you can see what works for you. As tempting as it might be, don’t just buy the cheapest roll of PLA on Amazon. There be dragons.

Depending on what you want to do, you may also want to check out some of the different infused PLAs. For example, wood-fill PLA tends to be much easier to sand than regular PLA, so I like to use it for larger prints which I want to smooth. Just be aware that infused filaments have a tendency to erode your printer’s nozzle pretty quickly.

Now I’ll save you some trouble and tell you what you absolutely don’t need in 2018, and that’s ABS. At the risk of starting a war in the comments, there’s no good reason to still be using ABS anymore. Not only is it unpleasant to work with and potentially harmful to your health (depending on whose research you read), but what little strength advantage it had has largely become moot with newer PLA formulations. If you need strength or temperature tolerance beyond what PLA is capable, save yourself the headache and check out PETG or nylon.

The only possible reason you might still want to use ABS anymore is to do acetone vapor smoothing. But unless you’ve got some assembly line knocking out little statues or art pieces that need to be rapidly smoothed without concern for surface details or mechanical tolerances, you’d be better off just sucking it up and grabbing some sand paper.

Digital Calipers Pay for Themselves

If you’re going to take 3D printing seriously, you need a digital caliper. You can use it to check filament diameter for extruder fine tuning, to verify the dimensions of a calibration print, or to take accurate measurements of a part you want to replicate in 3D. You could get an analog one if you want to pretend you’re Wernher von Braun or something, but the ease of use and effortless accuracy afforded by the most basic of digital calipers just can’t be beat.

Don’t be fooled into buying some Mitutoyo digital caliper that costs nearly as much as an entry-level 3D printer either; you won’t need that kind of accuracy when working with extruded plastic. Even cheap calipers can muster up an accuracy of 0.1 mm and enough repeatability for our purposes. A basic six inch digital caliper with a hard storage case shouldn’t cost you more than $20 USD, and will pay for itself many times over.

As a general rule, a part needs to be strongly adhered to the bed for successful printing. A big piece stuck down properly to the bed can easily be so firmly attached that you could lift the whole printer up by it. That’s exactly what you want while the print is ongoing, but when the print is over it can be a problem.

You don’t want to just yank the thing off; doing so could damage the printer or break your completed part. You also want to be very careful of using a knife to get under the print and pry it free. It sounds reasonable enough, and surely every 3D printer owner is guilty of doing it on occasion, but there’s a very real risk of slipping and cutting yourself. Even if you manage to get your print off the bed without opening a vein, there’s still a high chance of gouging or scratching the bed because you have to hold the knife at an angle.

To avoid hurting yourself or your printer, you should spend the couple of dollars on a proper print removal tool. Generally speaking these are as thin as a knife blade, but without the sharp edge. They’re also usually angled in such a way that you can hold the handle parallel to the bed. These two design elements mean that there’s a much lower chance of damaging your bed, as the tool won’t be coming in at an angle.

Personally I use a print removal tool by Gizmo Dorks, and I’ve been very happy with it. After two years or so of regular use, the leading edge of the blade has a few nicks in it from some of the more stubborn parts I’ve had to pull up, but nothing serious. For less than $10 USD, you can’t go wrong. 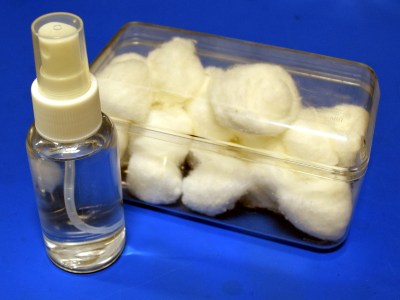 A dousing of isopropyl alcohol will remove waxes, oils, and other contaminates from the bed which can greatly improve print adhesion. No matter what you’ve got on your bed, from 3M Blue painter’s tape to PEI, you should be wiping it down as often as every print to help prevent curling and warping.

Some people like to use alcohol prep pads, the kind of thing you’ll find in a first aid kit. This isn’t a bad idea, especially given how cheap they are. But personally I keep a small mister bottle of alcohol and some cotton balls in a box near the printer. Before a print I’ll give the bed a good spray, wipe up with one of the cotton balls, and toss it in the trash. You could also use a microfiber cloth or something along those lines, but you’ll need to make sure it’s getting regularly washed to keep from contaminating the surface.

The risk of fire, especially with some of the cheaper overseas printers that are now flooding the market, is very real. Though even high end machines aren’t completely immune, as we’ve unfortunately seen in the past. You should have a smoke alarm located near the printer. They are less than $10 USD at the big box home improvement stores, and well worth every penny if it goes off during an overnight print that went awry.

In the past we’ve talked about elaborate fire suppression systems for 3D printers, but a basic “ABC” type fire extinguisher located in the same room as the printer would be more than sufficient if you want to have some defense in the worst case scenario. Again, these are cheap and readily available for a reason.

These are a few things which I believe every 3D printer owner should have, they’ve served me well for years and are what I find myself relying on most frequently. But surely there are others out there which are worth mentioning. What would the readers of Hackaday consider to be “Must Haves” when it comes to desktop 3D printing? Better yet, what would you say is something new 3D printer owners should avoid wasting their money on?

108 thoughts on “The Essential List Of 3D Printer Accessories”