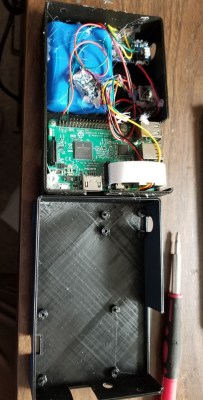 [Christopher Foote] didn’t play quite as many games as he wanted to as a child. After years of catching up using the RetroPie and the PiGRRL 2, it was when he first picked up a Switch’s joy-cons that inspiration struck. Behold: the PiSwitch!

Realizing they operated on Bluetooth tech, [Foote] spent a fair chunk of time getting the joy-cons to properly pair to the Raspberry Pi 3 and function as one controller. Once done, he relied on Linux Joystick Mapper to manage the keybindings with some extra legwork besides to get the analog sticks working properly.

To make this console mobile, he’s packed a 6600mAh battery and Adafruit Powerboost 1000c into the device, added a second headphone jack and speaker for commuting and home enjoyment, and a Pi V2 camera module. A 3D printed case, encapsulating these components and a seven-inch touchscreen, also allows the joy-cons to be detached — though he plans on updating its design in the future.

The PiSwitch boots into a custom UI  that lets you select different services — RetroPie, Kodi, Debian, and the terminal — while the joy-cons seamlessly function together or individually regardless of the activity. Check out the quick intro tour for this project after the break!

He and his son love it as-is, but [Foote] plans to add Steam streaming capability down the road. For more info on the build, his Instructables guide has you covered.

6 thoughts on “It Looks Like A Nintendo, But It’s Running A Pi: A Gamer’s Long-Sought Dream Handheld”