Our Hackaday Prize Challenges are evaluated by a panel of judges who examine every entry to see how they fare against judging criteria. With prize money at stake, it makes sense we want to make sure it is done right. But we also have our Hackaday Prize achievements, with less at stake leading to a more free-wheeling way to recognize projects that catch our eye. Most of the achievements center around fun topics that aren’t related to any particular challenge, but it’s a little different for the Infinite Improbability achievement. This achievement was unlocked by any project that impressed with their quest for power, leading to some overlap with the just-concluded Power Harvesting Challenge. In fact, when the twenty Power Harvesting winners were announced, we saw that fourteen of them had already unlocked the achievement.

Each of the Power Harvesting winners will get their own spotlight story. And since many of them have unlocked this achievement, now is the perfect time to take a quick tour through a few of the other entries that have also unlocked the Infinite Improbability achievement.

Photovoltaic solar power is the fastest growing energy source worldwide. And since the technology easily scales from gigawatt power stations all the way down to little waving cats, it’s no surprise we saw a lot of experiments with solar power. Almost half of the Power Harvesting Challenge semifinalists either incorporate solar cells directly or help make the most out of their power. And if that’s not enough solar inventiveness for you, there are even more solar explorers who have unlocked the achievement.

Like [Aidan Ruff], who lives on an olive farm far off the electrical grid. He’s in the middle of building a solar tracker to get more power from his 60-panel solar array. The system calculates optimal angle using GPS for time, latitude, and longitude, and a small weather station watches for high winds so it can tell the array to lay flat in self-protection. This is a project with immediately measurable returns because any increase in solar power generation will directly reduce the need to run a fossil-fuel burning generator.

If just changing angles on solar panels aren’t interesting enough, how about solar panels on the move? The Sun Chaser is a sun-seeking robot that carries a solar panel on its back. It could harvest solar power in places where a static array would be shaded for part of the day. Mobility allows the robot to chase beams of sunlight, elbowing aside cats looking for a warm place to nap. The project comment section immediately asked whether the increase in power generation would offset the power consumed by the mobile chassis. We expect there’ll be a crossover point where, if the panels were shaded for more than some percentage of the day, it would make sense to move the panel. We look forward to creator [Dennis] finishing the build and find out!

As a civilization, we are adept at turning thermal energy into electrical power. Sadly our most efficient heat engines only work at large scales. To explore power harvesting opportunities at small-scale, we must turn to thermoelectric generators. The efficiency may be lower, but in exchange, these devices open up opportunities where a big steam turbine would never work.

In this field, we have two parallel efforts to create small-scale floating power plants: sun shining above and water below provide the temperature difference. [Kedric] took the direct approach and built initial prototypes of SEBS (Seebeck Effect Buoy System) out of blocks of styrofoam, populated with electronics already on hand from other projects. Future iterations will benefit from 3D printing, as [Kedric] recently found one to use. In contrast to SEBS, [Josh Starnes] leveraged 3D printing from the start of Lily Power Pods. The visible parts above the water have the aesthetics of flower petals and function to concentrate solar energy. And the best part is that these two creators are comparing notes via their project pages. Sharing knowledge and experience will make both projects better!

Other thermal projects focused on different settings, as dictated by their respective project goals. The BBQ Thermogen project has plenty of heat energy available, in fact so much heat that the challenge is making sure the electronics won’t cook along with the meat. The heat management challenges here are similar to the wood stove generator we’ve previously covered. And on the topic of similar challenges faced by multiple thermal energy projects, the self-lighting beverage glass project is trying to harvest heat from hot beverages just like the Coffee/Tea Cooling Buddy project, but with the goal of lighting a LED versus turning a cooling fan.

While we love to see people pushing well-known energy sources into new applications and niches, it’s also a lot of fun to see projects playing with less mainstream sources of energy. These explorers unlocked the achievement by going off the beaten path with their unconventional thinking that probably didn’t fit neatly within criteria used by our Hackaday Prize judging process.

We recently covered a history of static electricity and how to generate it, but that’s not the kind of static electricity generation [chris jones] has in mind. He has an idea for a Triboelectric Generator to convert everyday static electricity into usable electrical power. This is something we know to be possible and it would be great to see the idea expanded, but [chris] has not yet turned the theory into practice. Lacking a proof of concept may be an issue for prize judging, but bravely diving into a novel field is enough to unlock the achievement!

And finally, we have a potato battery. A staple of elementary school science fair projects, it rates poorly on every objective measurement for an electric power source. Nostalgia is possibly the only value where it rates high. Well, that and fun. Hence the achievement for [Alexandre LE GALL]’s modular potato robot system. Yes we know the potato is just an electrolyte source… in fact the prototype used an onion instead of a potato to get started. To inform the design of supporting electronics, onion power production was measured and plotted out on graphs that would have definitely stood out in a science fair. We love seeing a high-tech take on a low-tech battery, and we hope this robot’s ultimate fate will be better than an earlier potato power robot. 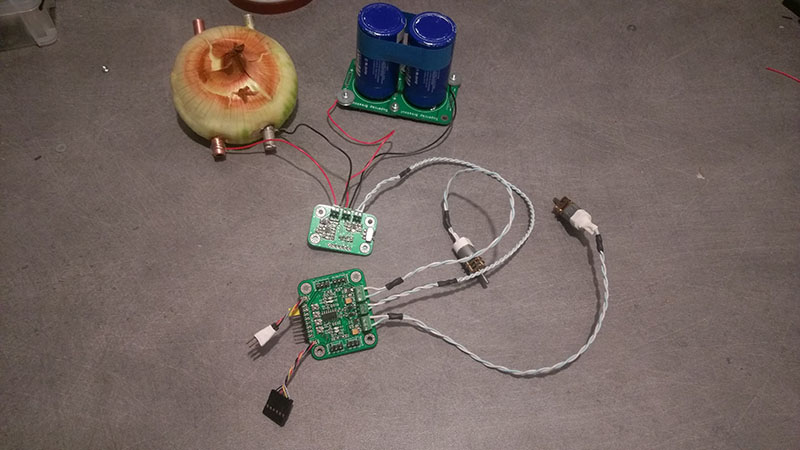 From solving practical energy needs on an olive farm, to a whimsical rehash of the humble potato, we welcome creative energy seekers with the Infinite Improbabilities achievement. And while the end of the Power Harvesting Challenge likely means fewer new projects in this arena, the achievement is still open and you may find new and interesting additions in the months ahead.

And what comes after the Power Harvesting Challenge? The Human-Computer Interface Challenge! Get more details here and bring your ideas for how humans and computers can better work with each other. And while you drive for that prize money, keep an eye open to the achievements you can unlock along the way.