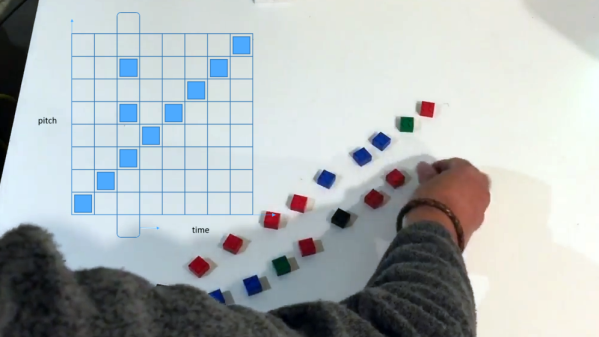 We’re not sure what it is, but something about LEGO and music go together like milk and cookies when it comes to DIY musical projects. [Paul Wallace]’s Lego Music project is a sequencer that uses the colorful plastic pieces to build and control sound, but there’s a twist. The blocks aren’t snapped onto anything; the system is entirely visual. A computer running OpenCV uses a webcam to watch the arrangement of blocks, and overlays them onto a virtual grid where the positions of the pieces are used as inputs for the sequencer. The Y axis represents pitch, and the X axis represents time.

Embedded below are two videos. The first demonstrates how the music changes based on which blocks are placed, and where. The second is a view from the software’s perspective, and shows how the vision system processes the video by picking out the colored blocks, then using their positions to change different values which has an effect on the composition as a whole.