Show and Tell? Nope. Come and Do!

The hacker ethic permeates CCC: it isn’t just attended by the participants, it is the participants. Two giant halls were dedicated to “assemblies” — hackerspaces or interest groups or simply groups of people who get together. And the assemblies are probably still the heart and soul of the Congress — one of the “C”s in CCC stands for “Communication” after all, and it’s the assemblies where you can catch up with friends and meet new ones. And it’s in the assemblies that I spent most of my time this year.

While there’s no debating that some of the assemblies brought awesome finished work with them, I love to see all of the assemblies who show up with not-yet-complete projects and spend at least some time during the Congress working together. Want to know what hackers do when they get a few days free? Hack.

Upload your own firmware into post-apocalypitc pneumatic robot

Knitted during the congress

Hacking around the virtual campfire

PDP-8 lab edition, brought back to working at 35C3

Our banner: stolen on night one. Theft is the sincerest form of flattery? Next time, please wait until the last night.
The Hackaday community put together a first-ever assembly, and we had a great time! On the show and tell front, [Tobias] brought a giant LED display driven by a custom FPGA frame buffer and a Beaglebone running vintage games. [Jo] and [Tobias] also brought a few segments of their flipdot display project, which is going to be a one-meter diameter circle of flippy goodness when all’s said and done. Although they actually got a bit of work done on the project, they were also kept busy explaining what they were working on to seemingly everyone who passed by.

[Dave Darko] had a slew of his custom badges on hand, including one that he made for the conference. In true Chaos spirit, it didn’t have any firmware written yet — it was just a blank, multi-radio slate. So he handed a bunch out to [SpaceHuhn] and the rest of the Innsecure crew for them to hack on. Let’s see what they come up with. [Alex] was working on layout and parts sourcing for even tinier LED matrixes! And Prof. Fartsparkle was building a soundboard to add noises to his scooter.

I brought a project — a honeycomb shaped bee-eye of sixteen photoresistors and a matching display — that I had just whipped together the night before leaving home. Needless to say, the firmware wasn’t yet written and I ran into a brick wall after working on it for a couple hours on the train ride up. In one of those only-at-Congress moments, I went off to find [Mattias] who wrote the Forth system that I use for projects like this. He solved my problem in a jiffy, and then we were on to talking about everything from LEDs as wavelength-dependent light sensors to his recently completed Ph.D. in biophysics. 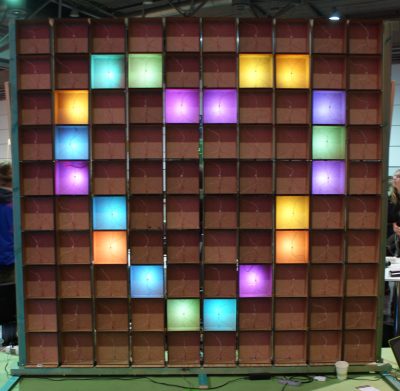 Another nearby assembly was putting together a fantastic addressable pixel array out of laser-cut wooden blocks. Everything was put together on-site, and as far as I know a lot of the graphics were programmed on the last day of the Congress. (You can’t see it here, but the wall is entirely modular and each block connects to the next using acorn nuts and washers for both physical support and electrical contact. Very clever!) Other assemblies brought 3D printer farms, entire kitchens, or vintage computers to be brought back to life. Work was in progress.

We were nearby the Hardware Hacking meta-assembly, where [Mitch Altmann] was holding down a seemingly endless series of beginner-oriented workshops, [Piotr Esden-Tempski] was giving his FPGA workshop based on his iCEBreaker boards that he gave at Supercon, [Kliment] was teaching the gospel of skillet-based reflow soldering, and [Helen Leigh] was teaching an overflow crowd how to make flexible fabric sensors. Solder was melting and code was being typed or debugged all around, 24 hours per day. And this was just in one hall; the other had a self-made vehicle racetrack!

In short, the assemblies at Congress are like a well-running meta-hackerspace where everyone brings their projects in whatever state, gathers together, brainstorms together, debugs together, and simply enjoys hacking. It’s too bad that it can only be four days per year.

The main hall at night

Everything is prettier with colors

Looks normal on the outside

One awesome bar of many

Don’t jump from the edge of the pool!

This meme got out of hand pretty quickly.

Someone had to do it

See you at camp!

Oh yeah, there were talks too. At the Hackaday assembly, we projected one of the five simultaneous talk tracks on the wall, but still there was no way to take it all in. Fortunately, everything’s available online, and in translation if you’d like. We’ve covered a few so far, but we’ll be writing up a few more in the coming weeks, so stay tuned.

(Bonus audio tracks! Want to hear the pneumatic robot or the bells/light sculpture in action?)

We also stumbled on a few projects that need to be covered Hackaday-style, and some of them are seen in the picture gallery. And if you were at 35C3 and you saw something amazing that you think we should write up, let us know!