In general, I try not to present these teardowns as product reviews. It’s partially an ideological choice, but more practically, most of the gadgets I take apart simply don’t live long enough for me to actually use them as intended. But as getting permission from my significant other to take this system apart was contingent on me being able to restore it to like-new condition in time for wrapping, I’m able to give a slightly more informed than usual opinion on its operation.

The short answer is, it’s not actually that bad. The screen is bright, the buttons aren’t terrible, and on the whole it feels pretty solid. I’d go so far as to say that, given the price, I was impressed with the build quality from a user standpoint. I have no doubt that the hardware is more than worth the asking price.

As for the software, well that’s something of a mixed bag. As expected, there are a handful of games you might actually want to play included, such as all three Super Mario Bros. titles and favorites such as Contra, Adventure Island, and Spy Hunter. They’ve also wisely included NES games based on franchises that remain popular today, such as the surprisingly solid Captain America and The Avengers, and the technically impressive Batman: The Video Game.

But outside of that, the majority of the games on the system are modified into fever-dream versions of the originals, many with modern characters and themes shoehorned in.

Particular standouts include a reskinned version of Super Mario Bros. where you play as characters from Kung Fu Panda, and a bizarre side-scrolling Harry Potter shooter where you do battle against unrecognizable gremlins and what appear to be reanimated slices of bacon.

Minimal to the Extreme

Once you’ve had enough of Mr. Potters aerial escapades, the only thing standing between you and the inside of the system are a few screws on the back of the unit. Thankfully there’s no glue or clips keeping it shut, there aren’t even any wires running to the back side of the case that you need to deal with. 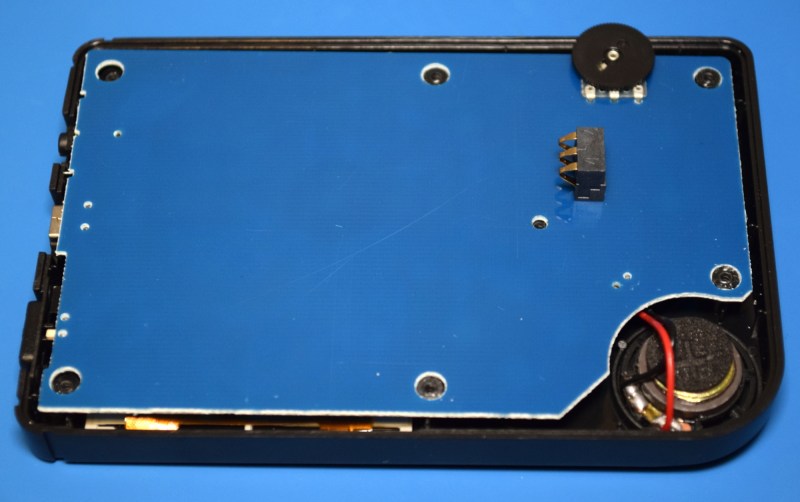 The first thing to note here is of course the fact that the back of the PCB is completely blank. The smooth panel is broken only by the volume knob and a connector for the battery, which is incidentally a clone of the Nokia BL-5C, perhaps one of the most bootlegged batteries of all time. Which I suppose is good news if your marathon Super Mario Bros. 14 session demands you have a second charged battery at the ready. 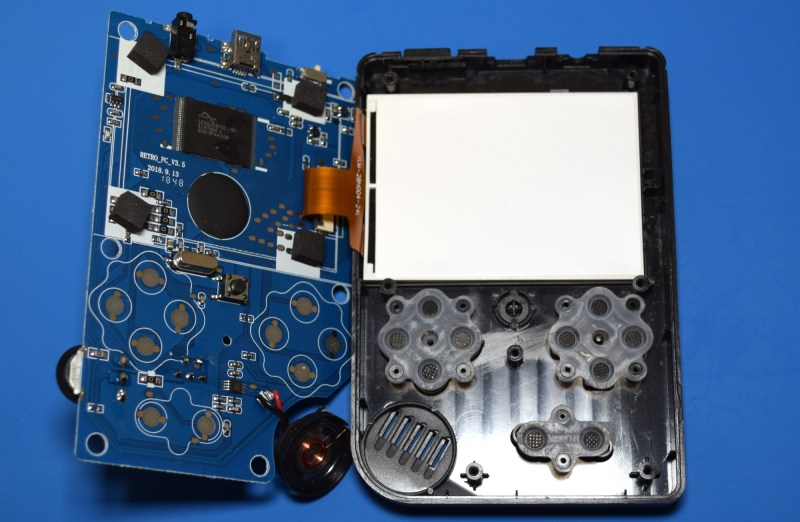 Flipping the system over, we can see just how little is actually on the board. Front and center is the dreaded epoxy blob, along with a 128 Mbit S29GL128P90 NOR flash chip that obviously holds the games. The datasheet for this chip (or at least, the original it’s a clone of) are readily available, so it should be possible to read its contents and potentially replace the ROMs included on the system. On the other hand, if you’re looking to play arbitrary NES ROMs on the go, there’s certainly better and more expedient ways to do it.

It’s also worth mentioning that, just like we saw with the Quirky Egg Minder, the single sided SMD board necessitates the use of zero value resistors when the traces start getting dense. However in this case we see only a handful used; a reminder that one needs to really commit if they hope to over-engineer at the same level as the fine folks at Quirky.

This system is one of the ones that comes bundled with an external controller, and while I can’t quite fathom a scenario in which it might be useful, I’ll admit that the input device was intriguing. It’s a bit small, but I liked the buttons and it felt reasonably solid in the hand. But what really had me interested was the fact it connected to the system’s USB port. Could it actually be a USB HID device?

Cool, it has L and R buttons.

But another black blob and the wiring would seem to suggest otherwise. The trio of communication wires made me think it was using some form of SPI, but when I connected the logic analyzer to confirm this, I found all the lines dead. Indeed, the system doesn’t seem to acknowledge the presence of the controller at all, and nothing in the manual explains if there is something I have to do to actually enable it other than plugging it in. Certainly something to keep in mind if you were excited about this particular feature.

You Get What You Pay For

Beyond the fact that the controller appears to be DOA, I’d say the system ultimately lives up to its advertising. While there’s probably no more than a dozen or so “real” NES games on the system, even the ROM hacks and bootleg titles are entertaining in their own way. If for nothing else but to see the lengths that the creators went to in an attempt to convince the user that these 30+ year old games were related to modern characters and franchises. I’d be lying if I said I wasn’t impressed with the NES-ified version of Plants vs Zombies.

From a hacking standpoint though, I’m less optimistic. When I did my teardown on The Oregon Trail handheld, I thought that it had the potential to make an excellent retro-themed Raspberry Pi handheld. With this system there’s enough room inside that you could fit a Pi Zero, but honestly there’s already Game Boy styled enclosures for the Pi that do it better so there seems little point.

Fiddling with the data on the flash and trying to insert your own ROMs would be an interesting experiment, and if anyone out there wants to take on the challenge we’d certainly love to hear about it. But personally, I think this gadget is best left as-is: a $20 stocking stuffer that will probably be forgotten come New Years.