As electronics hobbyists, we live in a somewhat two-dimensional world. Our craft is so centered around the printed circuit board that our design tools are specifically geared to spit out files tailored to the board house, who can then ship us a study in fiberglass and copper. We daub on flux and solder, add components, apply heat, and like magic, our circuits come to life, all within a few millimeters above and below the PCB.

Breaking out of this self-imposed Flatland can be therapeutic. At least that’s how Mohit Bhoite sees his free-form circuit sculptures, which he spoke about at length at the Hackaday Superconference this year. By way of disclosure, I have to admit to being a longtime fan of Mohit’s work, both at his day job as a designer at Particle, and with his spare time hobby of creating sculptures from electronic components and brass wire which can be followed on his Twitter feed. He ended up joining us for a circuit sculpture Hack Chat just before heading to Supercon, too, so not only was I looking forward to meeting him, I was sure his talk would reveal the secrets of his art and give me the inspiration to start doing some of my own. I wasn’t disappointed on either score.

Not a Secret; Just a Lot of Careful Work

As for his secret methods, it turns out that there really are none. Tooling is remarkably simple: high-quality pliers and flush-cutters with eyeball-sparing wire retainers, a 50-watt soldering station, and alignment tools such as machinist’s squares. Most of his sculptures are built from stiff brass rods from 0.3 mm to 1.0 mm in diameter, which are easily bent. He uses full-scale paper templates to guide his bends, although 3D-printed jigs come into play for jobs such as building matrices of discrete LEDs. Components float suspended within the wire frameworks, leading to open, airy structures that invite you to look at them from every angle. 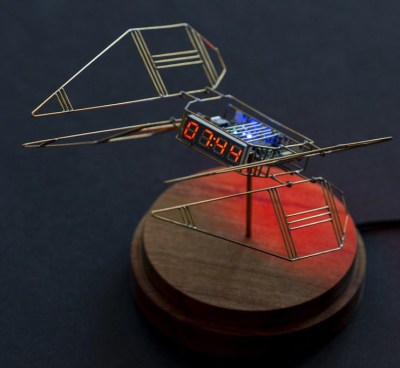 Mohit offered plenty of inspiration to go along with his approachable methods and materials. Many of his early works stem from his interest in BEAM robotics, with simple circuits that do little else but flash an LED or make interesting sounds. Some sculptures are more practical, such as bedside digital clocks. Others are explorations of patterns and forms, like his TIE fighter with Arabesque wings. There are even a few more interactive projects, like the handheld game console that lets you play the Snake on a small matrix of LEDs, or the Nyan-spewing POV robot built on a chassis of brass tubes.

I think the thing that strikes me most about Mohit’s circuit sculptures is their personality. He even mentions that at the start of his talk, and it really comes through in his designs. There’s something about the angles he uses, the way displays and LEDs are positioned, and the general feel of each piece that lets you know right away when you’re looking at one of his pieces. There’s also something calming about his pieces, as if they somehow captured the relaxation and escape from the stress of an engineer’s workday such a hobby is meant to provide.

Looking at Mohit’s sculptures is a little like gazing upon one of those Zen rock gardens. Except that rather than being inspired to pick up a rake to arrange gravel and sand, his works and his talk have inspired me to pick up pliers and wires and just start bending.

5 thoughts on “Bend It Like Bhoite: Circuit Sculptures Shatter The Bounds Of Flatland”