We’re used to LoRa as a free-to-use digital radio protocol allowing not-very-high data rate communications over distances of a few miles. It’s made all kinds of distributed sensor systems a breeze, and some experimenters have made an art of achieving communication over hundreds of miles. But what would happen if you took a brute-force approach to LoRa and simply wound up the power?

In a bid to test its efficiency at bouncing off the troposphere in normal conditions, [Inductive Twig] hooked up a HamShield 70cm LoRa shield to an 80W power amplifier and a high-gain Yagi antenna pointing directly upwards mounted with ingenuity on a spade, and drove around looking at the received result. With an effective radiated power of 1500W this wasn’t your normal LoRa, instead being operated with LoRa as an amateur radio mode. 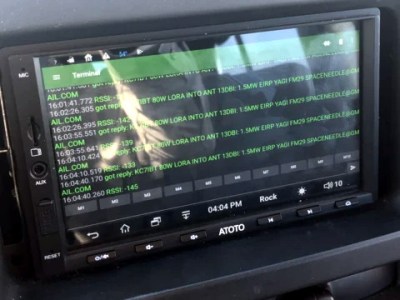 For those not familiar with radio propagation, radio waves bounce off some surprising things. In this case the aim was to bounce them off the troposphere, but while radio amateurs and LoRa distance chasers wait until weather conditions deliver a so-called “lift” in which the troposphere is especially reflective, here the experiment was performed under normal flat conditions. The result characterizes LoRa’s possibilities for everyday extreme-range mode rather than chasing records, and in that there were some interesting results. The reflected signal was receivable in bursts with low but consistent signal strength, with the limiting factor during the test as that they ran out of land upon which to drive in the southernmost peninsula of New Jersey. We’ve heard of War-Driving for open WiFi… does this car dashboard setup count as LoRa-Driving?

LoRa is designed as a protocol tolerant of low signal levels and some packet loss, so this experiment is an interesting demonstration of its possibilities when used at higher powers under a licensed transmission. It shouldn’t be possible to use the 70cm band for reliable tropospheric propagation under non-lift conditions, but this shows that it can be done. Meanwhile, take a look at a previous attempt to push LoRa using a balloon.