When [ccooper] told his parents he was gonna start up his electronics habit again, the last thing he expected was to save his parents’ marriage in the process. But as soon as he dropped this news, they made a special request: build us something to replace the multi-purpose manual cribbage board. It’s too ambiguous and starts too many arguments. 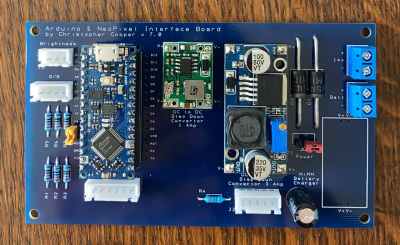 Cribbage is a card game that involves scoring based on hands. Traditionally, the score is kept with pegs on a wooden board with two or three sets of 60 holes. To build a digital cribbage board, [ccooper] decided to represent the positions on a field made from chained-together RGBW matrices.

These four matrices are run by an Arduino Nano Every and will display one of three scoring schemes that the parents usually play. A set of eight AA batteries ensures that Mum and Dad can play out in bright daylight and still see the LEDs. You can see how the brightness rivals the sun in the demo after the break. The code and Gerber files for the custom board are there if you want to make one for yourself, or know of another marriage that needs saving.

Every game deserves tidy record-keeping. If you’re more the RPG type, check out this amazing stat tracker made of stacked-up FR4 boards.