Among all the job-related problems wrought by the pandemic, here is another one that comes as the result of people generally staying home: there are hardly any backpackers to do traditional transient backpacker jobs like picking apples. Researchers at Monash University’s Department of Mechanical and Aerospace engineering found a way to fill in the gap by building a pneumatic robot arm that can harvest an apple every seven seconds at top speed. 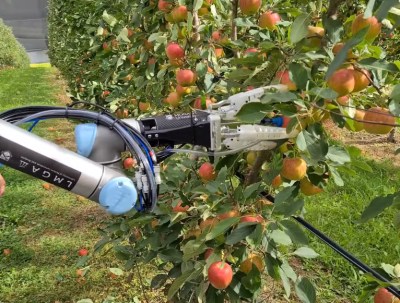 A suite of cameras and algorithms look for fruit amongst the foliage and carefully remove it by gripping it gently and twisting, much like a human would. In order to do this, the robot must consider the shape of the fruit, the way it’s hanging, and where to separate it from the tree while keeping damage to a minimum. A suction system helps pull the apple into the soft, four-fingered grip and then the arm twists and turns to deposit the apple into the bin.

There are a lot of upsides to this robot, including the fact that it works in any lighting and weather conditions and can ID an apple in less than 200 milliseconds. The only problem is that this operation results in the occasional missing stem — a cosmetic problem that sounds nit-picky, but would definitely prevent some stores from buying the fruit. Well, that, and there only seems to be one of these robots so far.

There are two videos after the break — a short one that gives you the gist, and a much longer one that offers a view of the suction cup, which emerges from the middle of the fingers like a xenomorph’s little mouth.

Some readers may be wondering why apples are still picked individually when shaking harvesters exists. “Shake-and-catch” tends to bruise apples, making them undesirable for produce sellers, however, apples destined for juicing have no issue with being handled roughly by the harvesters as shown in this fascinating harvest video. Robot grippers are gentle and we’ve seen all shapes and sizes that are suited to a particular need. When the needs are more general, rollers or squishy spheres might be the answer.