As a general rule these teardowns aren’t meant to be reviews, but given the rather unique nature of the i-Racer, I think we can spare a few paragraphs to talk about what it’s actually like to use this twenty-two year old budget VR headset.

The first thing you notice when putting on the headset is that its surprisingly comfortable. For one thing, it’s far lighter than you would assume given its size. But more importantly, there’s quite a bit of adjustability built in. Presumably Radica wanted to make sure children as well as adults could play the game, so you can push, pull, and twist parts of the headset to make it better fit your face. It even has a nice soft rubber nose pad to keep you comfortable during extended sessions.

That said, you certainly won’t be playing this game for long in 2021. It’s not that there’s a problem with the stereoscopic effect, in fact, that works quite well. It’s just that the i-Racer looks like every other Radica LCD game from the 1990s, except this one is literally being smashed into your face. A handful of graphite-colored cars flash in their predetermined static locations, a few bar graphs blink away to indicate things like RPM and vehicle damage, and there’s a generous helping of seven-segment digits to show the current speed, time, lap number, etc. To try and convey a sense of speed the lines on the track march towards you, and stadium bleachers will occasionally zip by on the right side. For some reason, a mountain pops up on the horizon from time to time.

To be fair, Radica did try and enhance the experience in other ways. If you crash or hit the side of the track, red LEDs located just outside of your peripheral vision blink and the handheld controller starts to vibrate. Calling it immersive might be a stretch, but it certainly makes for a more engaging experience than the LCD alone could manage.

All of the buttons and switches for the i-Racer, as well as the batteries, are located in the vaguely steering wheel shaped controller. Outside of the single transistor that’s being used to spin up a small brushed motor with an offset weight to provide vibration, the controller’s PCB is home to only passive components. Because of this, the thick cable running up to the headset has a whopping thirteen conductors. Today we’d expect to see some sort of digital communication between the hand unit and the headset, but 1999 was a simpler time.

The most interesting element of the controller is probably how it interprets the steering wheel input. Before opening it up, I expected to find some kind of potentiometer, but in fact it’s all done with specially shaped pads on the PCB. A metal contact is attached to the wheel, so that when the player turns left or right, the pads are shorted together in different combinations. While a clever solution, it does speak to just how low the target cost must have been for the i-Racer.

But that’s not the only cost saving measure to be found. It appears that Radica went on to reuse the controller’s injection molded shell for a number of racing wheel accessories they marketed for the PlayStation 1 and 2 under the name Gamester. These controllers have more buttons and delete the battery compartment from the i-Racer version, but the overall design is largely unchanged.

Get Your Head in the Game

After removing five screws surrounding the i-Racer’s eyepieces, the front of the headset neatly slides off and reveals what it easily the most cyberpunk looking piece of hardware we’ve yet run across. If nothing else, this thing would be a perfect base for a cosplay prop or Halloween costume.

Unfortunately, as gorgeous as the traces on the PCB and that massive ribbon cable might be, we’re also confronted with something quite ugly indeed: the dreaded black epoxy blobs. I was really hoping there would be some identifiable chips inside the headset, but given its lineage, this was always the most likely outcome. Still, take a look at those spring loaded wire tensioners that make sure everything remains tight as the user adjusts the headset. The i-Racer certainly wasn’t a high end piece of hardware, but it can’t be said that Radica didn’t put in some effort.

Removing three screws allows you to take the clear plastic cover off of the top of the optics, under which we can find the color transparency sheet and the transparent LCD. My research tells me Radica made at least one other game utilizing the same hardware, and with this design, you can see how easily the overlay and LCD could be swapped out. Incidentally the top cover is clear because a bright external light source needs to shine through the LCD for the i-Racer to work, similar to the VTech “Whiz Kid” luggable we looked at back in 2020.

Another Go Around the Track

It might seem like the case is closed on the Radica’s NASCAR i-Racer. After all, even the most dedicated NASCAR fan wouldn’t last more than a few laps with its dated display tech and limited gameplay. But while the electronics inside this turn of the millennium virtual reality headset may be effectively worthless in 2021, the headset itself and its relatively competent optics could easily be repurposed as a cheap head-mounted display. 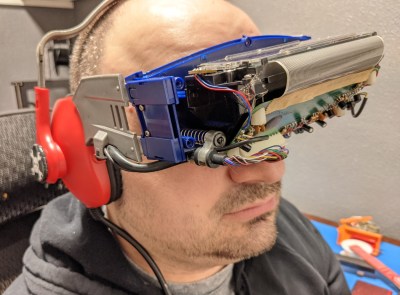 As a proof of concept, I put my phone over the opening at the top of the headset and played a few videos using YouTube’s VR mode. It actually looked quite nice, though the alignment was a little fiddly. The 45° mirror inside the headset allows the display to be closer to your eyes, making the whole thing considerably more compact than the traditional Google Cardboard clone. Of course you wouldn’t be limited to just using a phone, a modern LCD could easily be installed in place of the original panel for a more permanent solution.

In fact, it looks like a pair of ILI9341 2.2 inch LCDs would fit almost perfectly in the approximately 52 x 37 millimeter openings in the top of the headset. The resolution on those panels is admittedly pretty low, but it should be enough to get started. An interesting first project might be turning the carcass of an Radica i-Racer into a stereoscopic Arduboy of sorts, like an 8-bit Oculus. That’s what I’m planning on doing with mine, anyway.