The Case For Cheap VR

Clearly Google was cooling on the idea of phone-based VR for some time, but their exit from the market was further accelerated by the arrival of new stand-alone VR headsets from the likes of Oculus that far outperformed Cardboard. But not all consumers saw this as a step forward. While the new VR headsets were undoubtedly impressive, they were also expensive and introduced new software ecosystems that many users were reluctant to buy into. There’s still a market for cheap headsets that allow smartphones to be used for rudimentary VR, but it simply isn’t lucrative enough to entice a company like Google. 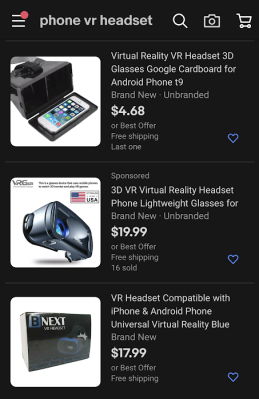 Of course not all companies have such high standards. Despite the considerable limitations of smartphone VR, there’s no shortage of Cardboard-like headsets available for consumers to chose from. They range from cheap toy store fodder to more advanced units that try to deliver the high-end experiences Google offered with their own Daydream Viewers.

A quick search on Amazon or eBay returns a seemingly unending string of VR headsets for every possible budget or application; all relying on nothing more than the smartphone you already bought and paid for. It’s easy to look at these headsets, many coming from fly-by-night companies, and see them as cheap clones looking to capitalize on Google’s idea. But the reality is, the Cardboard viewer specification was always intended to be open source.

Even if most manufacturers decided not to take the literal cardboard route that Google pioneered, the general layout of the viewer and the best practices outlined in the accompanying documentation were an invaluable base to work from. It didn’t take these companies long to adapt the basic Cardboard premise into a rigid plastic frame, and from there, start layering on new features and capabilities to set themselves apart from the competition.

Can a $5 USD plastic box with shoddy lenses compete on a technological level with stand-alone VR headsets, to say nothing of the models that use a gaming PC to provide the visuals? Of course not. But that’s hardly the point. Outfitted with a second-hand phone, these low-cost devices can deliver immersive 360° visuals at a fraction of the price. That means bringing VR to people and places that otherwise never would have had access to the technology.

While the state-of-the-art might not evolve much beyond where it is currently, Cardboard derived VR headsets aren’t going away anytime soon. Of course, the hardware is only one half of the equation. With the VR functionality already stripped from the latest release of Android, what will users actually be able to use these devices for? 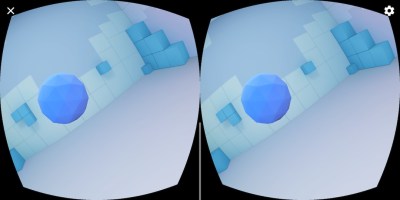 The good news is that while Android might have lost its native VR capabilities, they were never terribly important in the first place. Achieving a basic stereoscopic effect is as easy as displaying two viewpoints on the screen at once and letting the optical properties of the headset handle the rest. It’s a simple enough trick that can even be pulled off with an ffmpeg filter, and certainly doesn’t require any operating system level optimizations. Especially given the ever-increasing computational power of the average smartphone.

But as it so happens, Google has also released the Cardboard SDK as an open source project. This allows developers to create cross-platform VR experiences for Android and iOS, and provides functions for motion tracking and stereoscopic rendering. The official roadmap shows there are plans to continue development of the SDK, though it’s worth noting no commits have been made since December of 2020. That said there are a number of active forks of the project, so even if Google is no longer actively contributing, the community seems willing to keep pushing the SDK ahead for the time being.

Google has rightly caught a lot of flack in the past for abandoning products without giving them a chance to succeed, or worse, killing a product off without having an exit plan in place, but it’s hard to find fault in how they’ve decided to wind down Cardboard. We could debate why they were unable to monetize the concept of phone-based VR, especially with public interest being so high, but it’s a moot point. The important thing is that the community was given unfettered access to the Cardboard hardware and software once Google decided they couldn’t make money off of the idea.

Ultimately, Google’s handling of Cardboard is a fantastic example of innovation done right. Tech companies will always engage in this sort of speculative development in pursuit of the next best thing, and invariably, many of those ideas will fail to become profitable. Instead of locking up all that research and development where no one can access it, we should encourage companies that take the noble route of open sourcing their harebrained schemes. Just because they couldn’t figure out how to make it profitable doesn’t mean we can’t figure out how to make it work.

15 thoughts on “Google Calls It Quits With VR, But Cardboard Lives On”