LEDs have become so ubiquitous in our projects that just hearing that term probably conjures images of tiny illuminated domes in an array of single-spectrum colors. It’s easy to forget that these efficient sources of light come in a variety of form factors, including the retro-tacular filaments that [bitborked] used to make his beautiful analog LED wall clock.

Aside from its aesthetics, this timepiece features some great design. A custom PCB acts as a hub for all the LED filament spokes. The onboard brains come in the form of an ESP32, which means it can keep extremely accurate time via NTP. 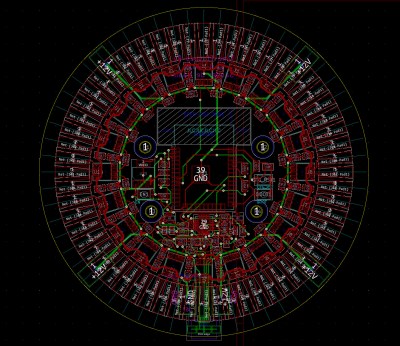 WS2811 LED controllers, which we’re so accustomed to seeing alongside RGB LEDs that they almost feel strange to see here, provide the 12 volts required for each filament and make individual addressing a breeze.

[bitborked] takes advantage of that addressability to display other animations in addition to the standard clock face. They also plan to implement MQTT for eventual alerts from other home automation devices. When it comes to just telling time, you can discern the individual “hands” by differences in their brightness, which sadly does not show up as well in video as it does in real life.

We would certainly be happy to have this clock on our walls, and we hope to eventually see more of its PCB designs. In the meantime, though, we can drool over a more digital take on the LED filament clock. Although, filaments are certainly not required to make a beautiful LED timekeeper.

13 thoughts on “A Custom Clock With LED Filament Hands”