The Whiskey Pirates have once again dropped an excellent electronic badge for DEF CON 29. This is, of course, unofficial, but certainly makes the list of the hottest custom bling seen so far this year.

I’m not able to make it to the con in person, but the Pirates sent over one of these badges anyway for an early look. It’s gorgeous, and peering into the circuit board it would be easy to think that the chip shortage ain’t got nothin’ on this badge. But this was possible only because of some very creative parts sourcing, and a huge dose of inspired design work. 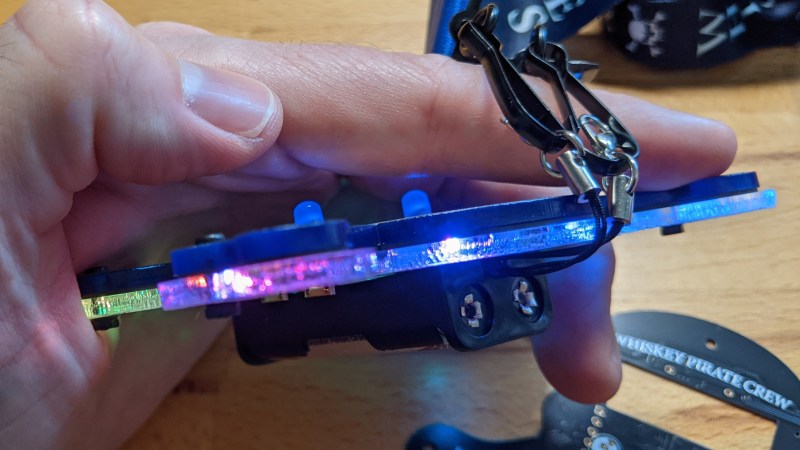 I usually begin with an overview of the hardware, but come on, this thing looks spectacular! Let’s talk about the aesthetic. This is one of the more polished looks for a hardware badge, akin to the Queercon 15 badge which used PCB faceplate and back, separated by edge-lit acrylic. [TrueControl] sandwiched the PCB between two sheets of acrylic, one that serves as a faceplate with both etched and translucent areas, and a clear backplate that carries the side-firing RGB LEDs to where they can be seen.

At the end of each of the cross-bones there is a black rectangle. At first I thought these were some kind of IR reflectance sensor, but they’re actually button caps. It looks like they’ve been cut out of acrylic of a thickness sized perfectly to be flat with the faceplate. They been superglued to the momentary push switches on the board.

The look of these caps is awesome. The function is a bit rough though, as the throw of the switch is very shallow. I did accidentally pop one of these off, probably by pressing too much on one end. A dab of glue has fixed it right back up. 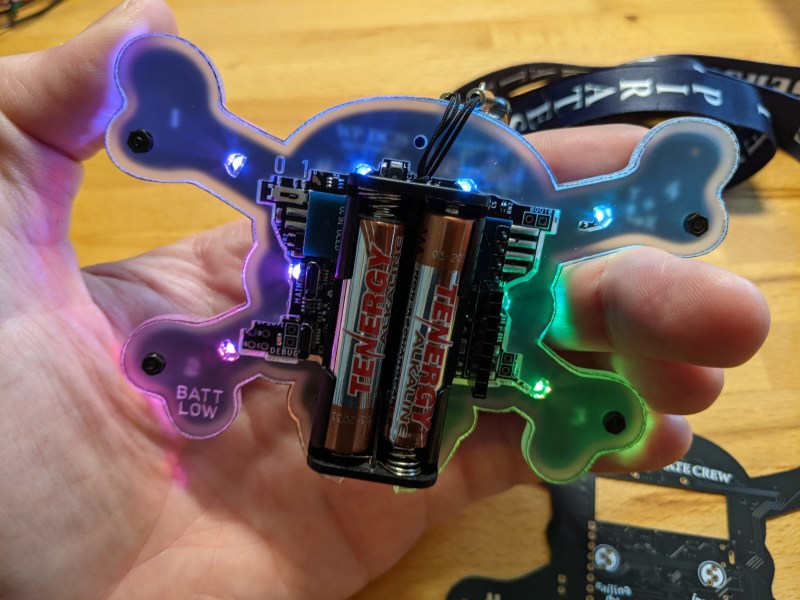 An OLED display shines through the forehead of the faceplate. The badge acts as a nametag which can be customized from the menu. One of the nice touches is that [TrueControl] once again used his fancy firmware trick that tilts the letters of your name to match the angle of the badge. Pretty slick!

Tearing Down the Hardware 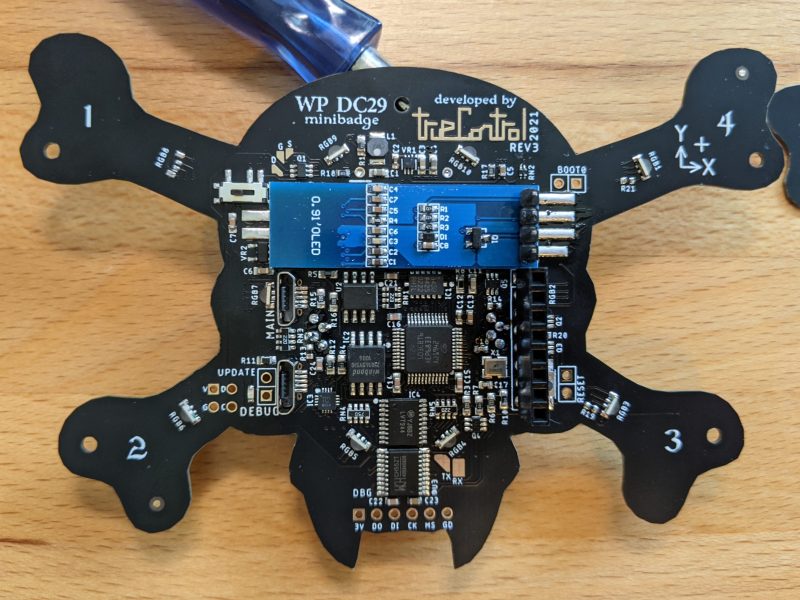 You have to be ambitious to get a good look at the populated board since it’s normally covered by an acrylic plate and the AAA battery holder. After desoldering that and removing the Torx head screws we are left with a really beautifully assembled board.

We find some creative part sourcing at work here. The main chip is a GigaDevices GD32VF103 (PDF datasheet) which is a RISC-V core (not to be confused with the GD32F103 which is an ARM Cortex-M3). [TrueControl] speculates this may be the first unofficial badge project to feature a hardware RISC-V core — the 2019 Hackaday Supercon badge had a RISC-V software core running on an FPGA. Also on board are a PDK13 (one of the Padauk chips — take a look at [Jay Carlson’s] guide we featured a while back) and there’s an 8051-based USB chip (CH552T PDF datasheet) near the bottom of the board for debugging.

There’s a hard power switch to one side. I also find two top-down USB ports next to the battery holder. I tried each of them; one enumerates and powers the badge, the other doesn’t enumerate but it does power the badge. When probing on the serial ports I saw characters echoing back but haven’t explored much beyond that.

The two RGB leds that make up the eyes appear to be flickering and I suspect there’s some data transfer happening there. If you look closely at the circuit board near the button on the bottom right bone, there is a two-pad footprint and a cutout in the faceplate clears the way for it. It’s possible this is some type of light sensor, although It may simply be an IR LED as I would expect a receiver to have three legs.

There’s another trick at play here, which is how to inexpensively source the OLED screens. Looking closely at this one you can see the hack that allows the tails of the pin header to be bridged to some pads on the PCB. These modules are cheap and abundant, but have you ever tried sourcing bare screens and placing your own components to drive them?

Yet Another Superb Offering from the Whiskey Pirates 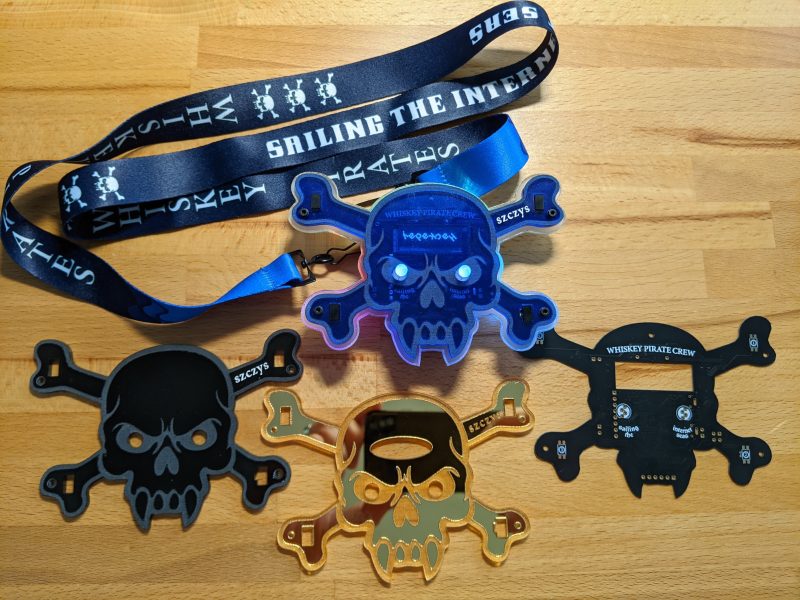 The most important aspect of making a hardware badge is easily found in this one: passion. Pandemics and chip shortages be damned, [TrueControl] executed on great ideas and got this one over the finish line. The electronic design is quite interesting, and the look achieved reaches a level that everyone will geek out about.

The package arrived with several versions of the face plate. I’m honored that he took the time to etch my name into not one, but three of those plates. And take a look at that part of it — it didn’t end with the etching, those letters are filled with white paint to make them stand out.

If you’re at DEF CON 29 this year, keep an eye out for people wearing these. That’s the Whiskey Pirate crew, and they’re a blast to hang out with. Hopefully I’ll have the chance to do so again at DC30!